Here's a sight we hardly expected to happen so soon. Shah Rukh Khan and Salman Khan's rumoured girlfriend Iulia Vantur just shared stage at Stardust Awards 2016, to present the Best Director award to Karan Johar for Ae Dil Hai Mushkil. We had reported to you how Stardust would be the awards show where Iulia will make her first singing performance after her music debut in Bollywood. However, little did we expect her to be a presenter as well. That too for the Best Director category. This definitely is a news that's gonna take time to digest. The pic, though, not so much! Also Read - Friendship Day 2021: From Shah Rukh Khan-Salman Khan to Priyanka Chopra-Kareena Kapoor – 7 Bollywood BFFs who turned foes and then became friends again

At the Stardust Awards 2016, Salman Khan decided to make a very silent entry. The paps weren't around him and many didn't even know that he was to drop by. But of course, we're guessing that he made this sudden plan to attend the show, for his rumoured bae, Iulia. It was the first time that she was performing at a Bollywood awards' stage. The Romanian beauty sung his iconic, Main Hoon Hero Tera song in her soothing voice. What was unexpected was to see her make a return to the podium with an award in her hand that she was supposed to present. That too with none other than Shah Rukh Khan! Also Read - Tuesday Trivia: Did you know Aishwarya Rai’s daughter Aaradhya Bachchan once thought Ranbir Kapoor was her father and also had a huge crush on him? 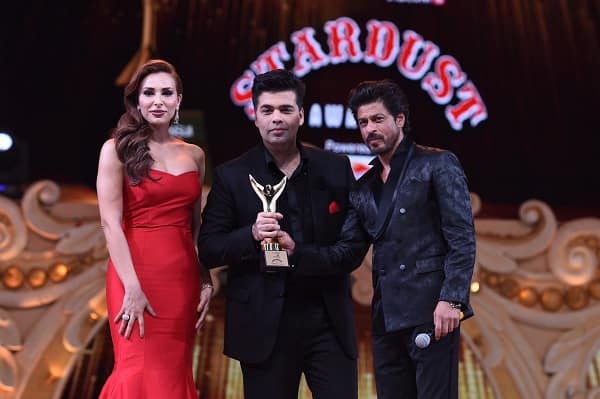 The 51 year old actor, who himself won an award of Best Actor for Fan, (by presented by Aishwarya Rai Bachchan) went up to present the Best Director to his closest bud Karan Johar. KJo won the award for his blockbuster hit, Ae Dil Hai Mushkil. The film also had Shah Rukh play a cameo but steal everyone's thunder. So without a doubt, him presenting the award was a big thing. What was quite surprising was the fact that Miss Vantur also teamed up with Khan to announce the winner. The picture of the trio on stage speaks volumes of how fabulous they all looked. Iulia serenaded wearing a gorgeous red tube gown. Shah Rukh and Karan were men in black! (ALSO READ - Stardust Awards 2016 FULL winners list: Shah Rukh Khan, Priyanka Chopra, Aishwarya Rai Bachchan win BIG)

Having worked on a song (Baby Ko Bass Pasand Hai) with Salman Khan and now sharing stage with Shah Rukh Khan, looks like Iulia is going to have a fab run in Bollywood! The pic is simply epic on another level! Don't you think? What are your thoughts on this, BollywoodLifers? Tell us in the comments section below. Stay tuned to this space for all hot scoop from Stardust Awards 2016.