Shah Rukh Khan’s daughter Suhana Khan, late Sridevi’s daughter Khushi Kapoor, and Sanjay Kapoor’s daughter Shanaya Kapoor, these three star kids are all set for their Bollywood debut. Suhana and Khushi will be seen in Zoya Akhtar’s The Archies which also stars Amitabh Bachchan’s grandson Agastya Nanda. It’s Netflix original film, and it is an adaptation of Archies comic book. Meanwhile, Shanaya will be making her debut with Karan Johar’s production venture Bedhadak. A few days ago, BollywoodLife did a poll and asked viewers that which star kid’s debut they are excited for. Well, the poll results are out now. Also Read - Shehnaaz Gill follows the BTS route, calls fans her ARMY

The winner is Shah Rukh Khan’s daughter Suhana Khan. She has received 52% of votes. Khushi Kapoor follows at second spot with 25% of votes, and Shanaya has received 23% of votes. Check out the results below… Also Read - Nushrratt Bharuccha sets the temperature soaring in a sexy orange outfit at her 37th birthday bash; netizens say she looks like a teenager [View Pics] 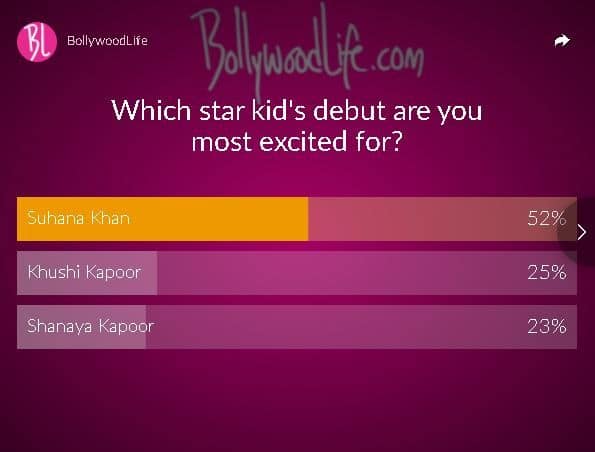 Well, Bedhadak was officially announced a few weeks ago, and the makers had unveiled the first look posters of the movie. Meanwhile, the makers of The Archies are yet to announce the cast officially. However, a few days ago, pictures of Suhana, Khushi, and Agastya were leaked from the sets.

While announcing her film Bedhadak, Shanaya had posted, "I am extremely grateful and humbled to join the Dharma Family with #Bedhadak - directed by the brilliant Shashank Khaitan. I can’t wait to kickstart this journey, I need all your blessings and love!"

Suhana, Khushi, and Shanaya, all the pretty girls have grabbed everyone’s attention with their social media posts. Moviegoers are excited to watch them in films. While we haven’t seen Suhana and Khushi in any show or movie, Shanaya had made an appearance in Netflix’s series Fabulous Lives of Bollywood Wives.