Supermodel Gigi Hadid just described Priyanka Chopra in one word, and the word is...

What's the one word that Gigi Hadid used to describe Priyanka Chopra?

Priyanka Chopra has millions of followers all over the world and she has a latest addition to the list. The actress who's busy ruling hearts all over the world, is quite popular among the celebrities as well. After flirting with Tom Hiddleston and Nick Jonas on the red carpet, the actress is busy relishing all the sweet comments from her women contemporaries as well. The latest celebrity to get smitten by the Indian beauty is none other than supermodel, Gigi Hadid. The 22-year-old's recent comment on one of Priyanka Chopra's pictures is a proof that she adores PeeCee. Also Read: Priyanka Chopra continues to flaunt her oh-so-gorgeous wardrobe as she shoots for Quantico – view pics Also Read - Trending Hollywood News Today: Why BTS wanted to name ARMY as 'Bells', Robert Downey Jr to be a part of The Sympathizer's screen adaptation and more

Priyanka Chopra recently hired IMG Model, a management firm to handle her professional commitments and guess what, Gigi Hadid is already associated with it. IMG Model's senior manager, Luiz Mattos recently posted a picture of Priyanka on Instagram to announce she's now associated with his company. And Gigi made the sweetest comment for the actress on his picture. She wrote, "she's so gorg!" And we couldn't agree more with Gigi. For us Priyanka is too gorgeous for even words to describe her and we're struggling to come up with more words to define her. Also Read: Priyanka Chopra has something in common with Wonder Woman Gal Gadot – find out what Also Read - Kendall Jenner, Sophie Turner and more Hollywood hotties raise the temperature in their bikini avatars during their beach vacay - view pics 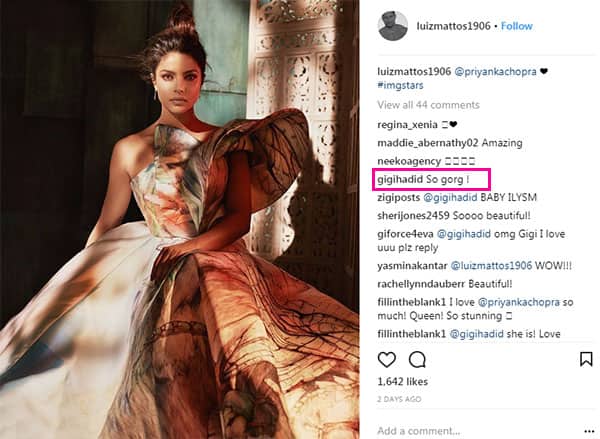 On the work front, Priyanka Chopra is currently shooting for the new season of Quantico in New York and it will premiere on April 26th. The third season of ABC’s Quantico will start from where the season 2 ended. While ABC had kept the story line of the new season under wrap till date, they recently released a synopsis and the official star cast of the same. And going by what we read, the plot has just intensified further with the entry of a more ruthless enemy.