Sushant Singh Rajput was allegedly found hanging by the ceiling of his apartment in Mumbai on 14 June 2020. However, a case of unnatural death has been registered and is being investigated. Sushant's friends and family are hoping for a CBI probe.

Sushant Singh Rajput's death is being currently under investigation. However, the truth is getting lost in the process of the investigation as a lot of things are being said about the actor and his family by some political leaders. In July, Sushant's father and his family registered a case against Rhea Chakraborty on alleged money laundering and abetment to suicide. Rhea has been keeping mum but has been sharing pictures of her chat and his page from the diary. About 50 plus people have been interrogated in connection to his work and personal life by the Mumbai police. ED had been grilling Rhea Chakraborty, her brother and others who were named in the case. However, they were not able to provide adequate answers to the questions. ED is investigating the money laundering angle of the case. Also Read - From Divyanka Tripathi to Nia Sharma: 10 TV actresses who garnered massive fan following and huge career growth in a short span

Meanwhile, Rhea has been asking for an investigation in Mumbai by the police reportedly against the family, friends and fans' CBI probe request. A decision of the Supreme Court is awaited on the CBI probe. Meanwhile, Sushant Singh Rajput's family members and well-wishers including previous costars Ankita Lokhande and Kriti Sanon are supporting #CBIForSSR so that the Dil Bechara actor and his family get justice. Varun Dhawan and Mouni Roy have extended their support to a CBI probe as well. Sushant's Shuddh Desi Romance costar, Parineeti Chopra also joined the movement saying, "All that is needed is the truth. #JusticeforSSR." Also Read - Trending TV news today: Anupamaa's Rupali Ganguly and Gaurav Khanna get goofy on Baspan Ka Pyaar, Kamya Panjabi regrets not meeting Sidharth Shukla and more

"#cbiforSSR," Varun wrote in his Instagram story while Mouni's story read, "#CBIforSushantSinghRajput." Have a look at their Instagram stories' snapshot below: Also Read - Ankita Lokhande shares loved up picture with beau Vicky Jain; shares, 'Don't underestimate the beauty of gods love story for you' 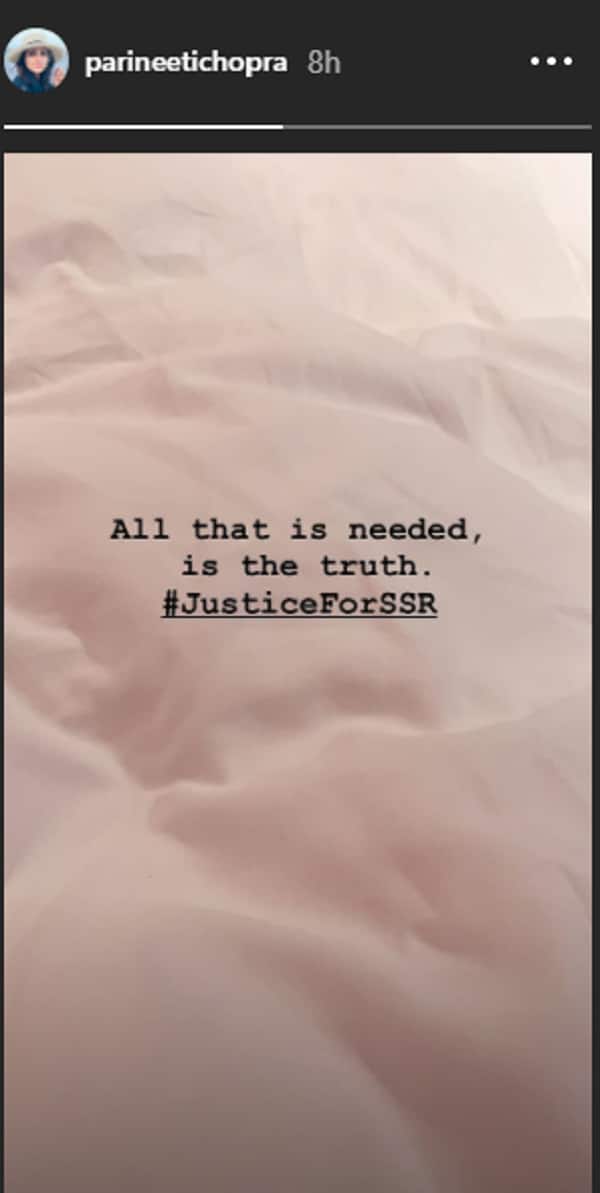 Meanwhile, SSR's doctor said that he cannot believe that the actor could have taken his own life. "The way he used to think and dream, which he has noted in his diary, you know it is very hard to believe that he took his own life. Something must have brought him to this crunch or circumstances have been made like that or something else happened in his life. So you know it is behind comprehension to think that he has taken his life," he told a news channel.