"I'm REAL and I am replying to my friends in REAL TIME", wrote Sushant.

Seems like Instagram is not happy with Bollywood actor Sushant Singh Rajput, as the photo-sharing application blocked the comment and reply feature on actor's profile and termed him 'too fast'. The 'Kai Po Che' star, on Saturday, uploaded a picture saying that he has been temporarily blocked by Instagram for misusing the feature. 'It looks like you were misusing this feature by going too fast. You've been temporarily blocked from using it. We restrict certain content and actions to protect our community,' read the screenshot.

Sushant Singh Rajput to act in and produce the remake of Dulquer Salmaan starrer Bangalore Days? 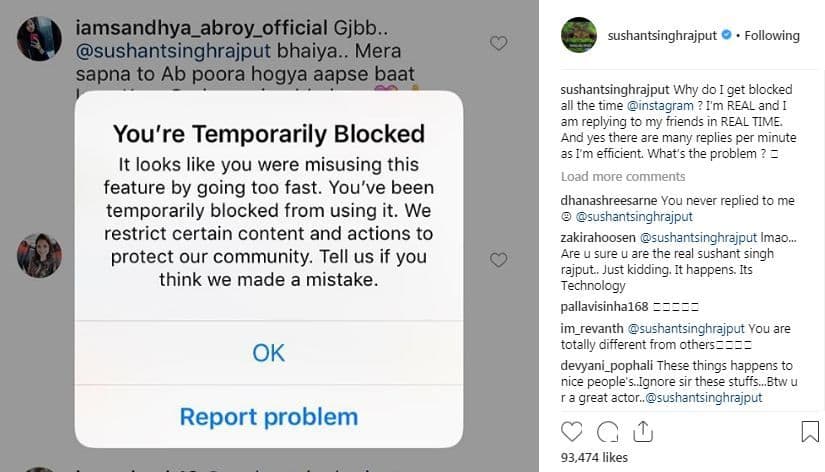 He captioned the image as, "Why do I get blocked all the time @instagram? I'm REAL and I am replying to my friends in REAL TIME. And yes there are many replies per minute as I am efficient. What's the problem?" Also Read - 'Ghar basa le,' Aastha Chaudhary recalls how Sidharth Shukla reacted on learning about her roka in a conversation days before his demise

Why do I get blocked all the time @instagram ? I’m REAL and I am replying to my friends in REAL TIME. And yes there are many replies per minute as I’m efficient. What’s the problem ? ?

On the work front, Sushant has lined up a lot of projects, including the Hindi remake of the Hollywood romantic drama The Fault in our Stars, Kizie Aur Manny and Kedarnath alongside Sara Ali Khan. He will even don the cap of a director for a sci-fi Hindi film.