When an online user questioned Sushant Singh Rajput's sister Shweta Singh Kirti on why she still supports Ankita Lokhande who was allegedly using SSR's name to promote her upcoming show, she gracefully handled the comment while extending her support to Ankita.

Ankita Lokhande is back on the sets of Pavitra Rishta that had made her and her ex-boyfriend Sushant Singh Rajput a household name 12 years ago. While the actress reprises her role as Archana, Shaheer Sheikh has been roped in to play Manav Deshmukh, the character originally played by Sushant and later by Hiten Tejwani. Fans, however, are agitated saying that they would not watch the show, which no longer features Sushant as Manav. Amid sharp reactions on social media, Sushant's sister Shweta Singh Kirti recently defended Ankita when a fan accused the actress of using SSR's name for publicity. Also Read - Trending TV News Today: Shehnaaz Gill makes candid comment on Sidharth Shukla, Anusha Dandekar in Bigg Boss OTT, Shoaib Ibrahim's dad's health improves and more

Sushant and Ankita had met on the sets of Pavitra Rishta and they started dating while working on the show. They ended their relationship in 2016 after 6 years. Though they went separate ways and found love again in their respective partners, their emotional bond was so strong that it got etched in people's heart and mind. It is also the reason why Sushant's fans often troll Ankita for breaking up with the actor. Also Read - Bigg Boss 15: From Aditya Narayan to Divyanka Tripathi – these celebs rejected Salman Khan's controversial reality show

So when an online user questioned Sushant's sister Shweta on why she still supports Ankita who was allegedly using SSR's name to promote her upcoming show, she gracefully handled the comment while extending her support to Ankita. Also Read - Trending TV News Today: Sonu Nigam spills the beans on quitting Indian Idol as a judge, Divyanka Tripathi refuses to do Bade Achhe Lagte Hain 2 and more

“Shweta Singh Kirti why do u support Ankit lokhnde b she hd been using Sushant n her fake affair vd him for her PR. In fact she is one partying vd most of the suspects involved in Annihilation OF SUSHANT," the user commented on Shweta's Facebook post.

To this, Shweta replied, "Drdivya I really don’t know what the truth is….but it is hard for me to overlook how Ankita has always stood by the family even after the death of Bhai. I have seen her take care of Bhai, once when I was visiting him in Mumbai and he had stomach pain I saw how she called the doc, gave him medicine and showered him with love. The act was enough to prove to me that she has a kind and loving heart."

Talking about the investigation into Sushant's death, Shweta further said, "I have full faith in the CBI and I am waiting for them to tell us the truth. I am praying to God everyday so that the truth comes out and I believe there is no bigger power than him. Have faith and stay strong.” 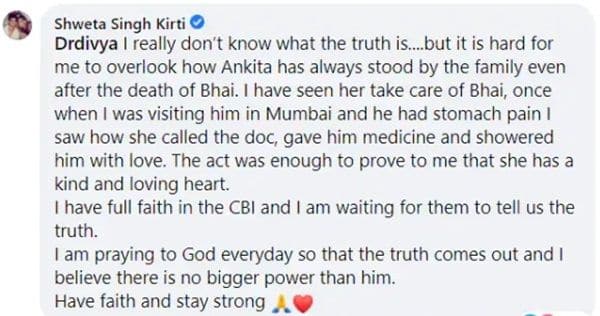 Ankita had earlier shared boomerang video playing with the show's clapboard. She also reposted a post originally shared by the official page of Alt Balaji featuring a photograph of herself and Shaheer posing together with the show's clapboard. "Sometimes in most ordinary lives, we find the most extraordinary love stories! Witness the extraordinary love story of Manav and Archana. #PavitraRishta Filming begins; streaming soon on #ALTBalaji #ItsNeverTooLate."