Taapsee Pannu gets into a heated argument with paparazzi for arriving 'late' at Dobaaraa event: 'Mujhse tameez se baat kijiye'

Things took an ugly turn when Taapsee Pannu lost her cool at one of the photographers at Dobaaraa event. She shot back at the paparazzi for yelling at her and asked them to speak to her respectfully. 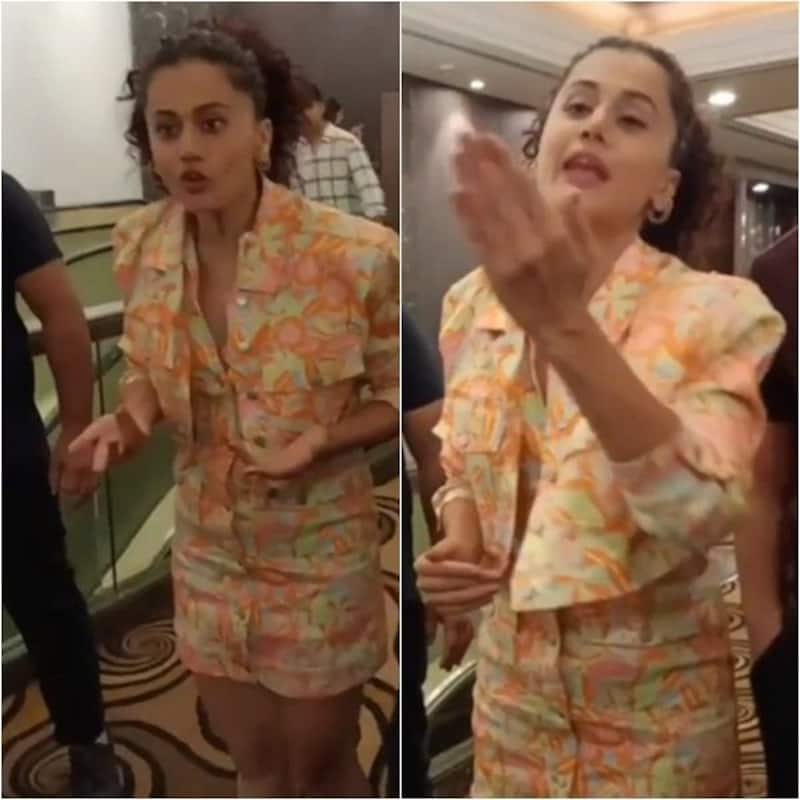 On Monday, Taapsee Pannu got into a heated argument with the paparazzi after she arrived late at the promotional event of her upcoming film Dobaaraa at Mithibai College in Mumbai. The actress got involved in an argument when the photographers complained that she was not giving them pictures as promised. Also Read - Taali: Netizens QUESTION Sushmita Sen playing the lead; ask, 'Why isn't the REAL transgender being cast in the film?'

As soon as Taapsee arrived at the venue, her team immediately escorted inside while the photographers kept calling her name asking her to stop for pictures. They also told her that she is late and they have been waiting for her since a couple of hours. Also Read - Koffee With Karan 7: Kangana Ranaut, Vivek Agnihotri and more celebs who have slammed Karan Johar’s chat show

Taapsee tried to clarify her side saying that she followed what she was instructed to do, but things took an ugly turn when she lost cool at one of the photographers. She shot back at the paparazzi for yelling at her and asked them to speak to her respectfully. Also Read - Trending Entertainment News Today: Vijay Deverakonda's relationship status revealed; Karan Johar on not inviting Taapsee Pannu on KWK and more

"Mujhe jo bola gaya main kar rahi hoon, aap mere pe kyu chilla rahe ho? Please talk to me in a respectful manner, I am just doing my work. I have arrived on time at every place I have been asked to. You will talk to me respectfully, I will also talk to you respectfully," Taapsee was heard saying in the viral video.

As her team tried to calm the situation down, Taapsee told the paparazzi, "The camera is on me, so only my side can be seen. If it's on you for once then you would have realised how are you talking to me." Taapsee then folded her hands after some more exchange of words and said, "Aap hi hamesha sahi hote ho, actor hi hamesha galat hota hai."

Dobaaraa will see Taapsee portraying one role but two different avatars of a woman who is trapped in the world of many unfolded mysteries. The audience will see her juggling around two different worlds. The film will capture the illusions of her presence in the past and the present in different looks without exploring the double-role personality. It will follow her struggle of finding the answers to the mysteries around her as she takes the suspense of the film ahead. It is set to hit theatres on August 19.