Babita Phogat slams down Krushna Abhishek quite literally just to prove that it is really her!! 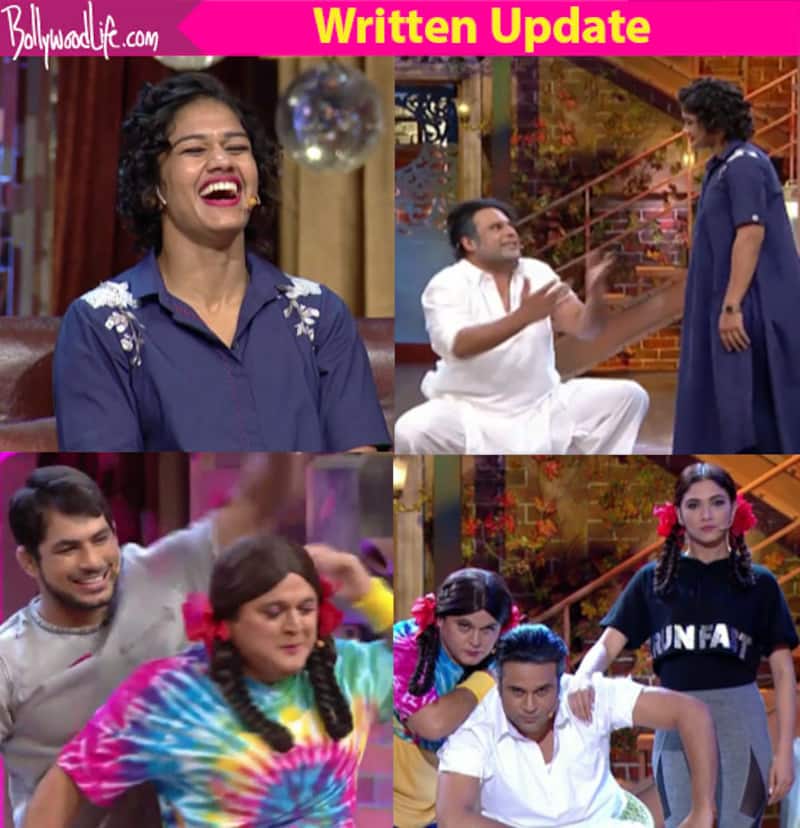 The Drama Company is in today inspired from the blockbuster Dangal with the real Dangal Girl-Babita Phogat on set with her brother-in-law and wrestler Pawan Kumar. We have the skit for the day the father Krushna Abhishek trying to train his two girls Sita aka Riddhima Pandit and Papita aka Ali Asgar to wrestle. He asks them to exercise and ends up getting hit and then asks them to practice in mud but Sita complains about skin getting spoilt which forces the father to exchange this daughter for Sugandha Misra. Papita wants to run away with her boyfriend Ramesh. Shulabh Kumar Shauchalay-Sudesh Lehri walks in as the hairstylist to cut off the hair of the two wrestling aspirants and ends up cutting just a bit and he runs off with both of Papita's shoes as they realise he is actually a mental patient.

Babita proves herself to be Babita by hitting Krushna off his feet and as he lies on the floor with a pained back he accepts the truth. A wrestler is called in to make the two girls practice and Papita ends up getting unconscious. Hakimji is called in who ends up giving a shock to the entire lot. The play shifts to the day when the wrestling happens and the father and mother is watching the girls fight on TV. As the girls keep losing one by one the father advises her to bite the opponent. She does that and wins. The father realises his final folly when he comes to know he has sent the girls to fight for WWS and not kushti. Finally this leads to more and more chaos as the entire stage is up in storm with everyone fighting with everyone and in the end the referee is declared the winner. Babita and Pawan say they have never laughed this much in their entire life as they have a generally serious image back home. Also Read - The Kapil Sharma Show: Krushna Abhishek, Chandan Prabhakar, Bharti Singh and more actors who left the comedy show after getting famous