Srinivasa Ramanujan is one of the brilliant minds India has ever produced, and his story needs to be told to inspire countless many such young minds. So we really appreciate the makers to bring out his life story in the form of a film. 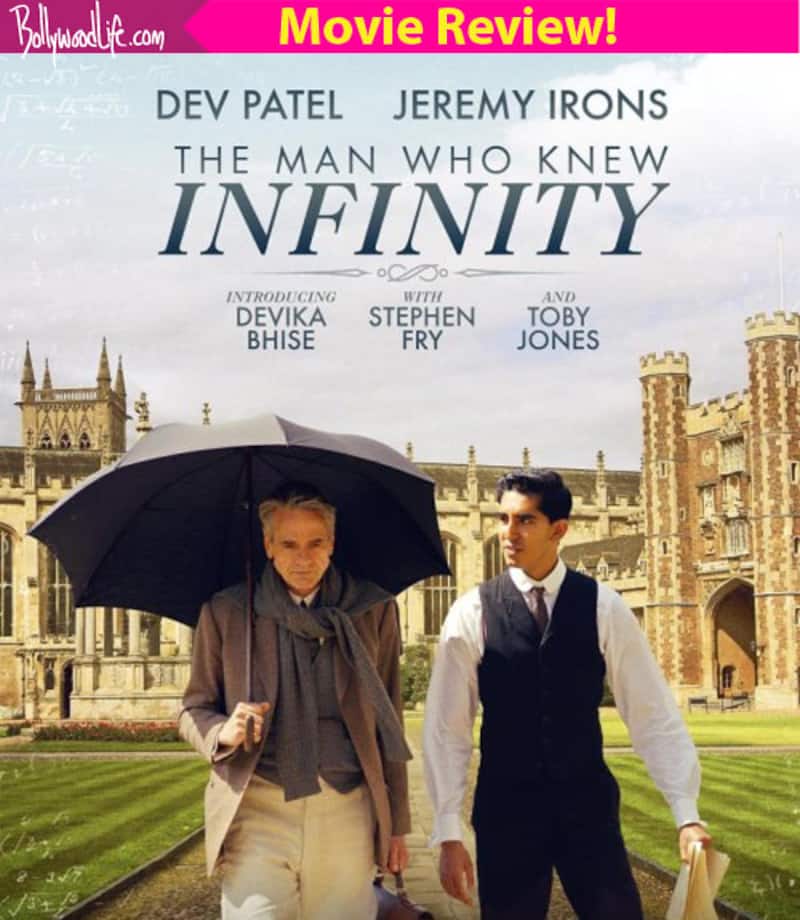 The film is directed by Matthew Brown.

It's strange that our country has so many distinguished personalities in various fields, some even achieving worldwide acclaim. Yet so few films have been made on their lived in India. However, one such personality, a brilliant mathematician called Srinivasa Ramanujan, has his biopic made in both India as well as abroad. Ramanujan, whose untimely death in the prime of his youth was mourned by mathematicians all over and whose works helped scientists understand the behaviors of black holes, certainly deserved this honour. Let's check out if the film is worthy of his brilliance! Also Read - Trending Hollywood News Today: BTS' Jungkook gives glimpse of boxing skills, Kanye West posts pic of GF Julia Fox and more

What's it about Also Read - Happy birthday, AR Rahman: Did you know The Mozart of Madras' Oscar-winning track, Jai Ho, was earlier composed for THIS Salman Khan movie?

In the early part of the last century, when the British ruled our country, there was a genius in Chennai (then Madras) called Srinivasa Ramanujan (Dev Patel). Though he did not have much of a formal education, his profound knowledge in the subject of mathematics can baffle the most brilliant of the minds. But like most of the geniuses of that time, he lived in miserable conditions with his highly devout mother and his newly wedded wife. When his thesis reaches the hands of the brilliant professor GH Hardy (Jeremy Irons) in UK, the man is astounded by his work and invites Ramanujan to be a part of his research work in Cambridge University. However, Ramanujan's stay in World War I-affected England was not bereft of tortures like racial discrimination, ignorance and illnesses. But he continued to develop his work ignoring all these, even his pining for his wife back home, thereby breaking new grounds in mathematics. Above all, he builds a heartwarming rapport with his mentor turned friend, Hardy. This film is all about their camaraderie... Also Read - Here's why Shah Rukh Khan rejected the Oscar-winning film Slumdog Millionaire

Srinivasa Ramanujan is one of the brilliant minds India has ever produced, and his story needs to be told to inspire countless many such young minds. So we really appreciate the makers to bring out his life story in the form of a film, without making it look like a documentary. Another very big positive aspect of the film are the performances of the main cast. After blowing us away in Batman V Superman as Alfred Pennyworth, Jeremy Irons gives another terrific performance as a genius who has difficulty connecting on a human level. His scenes with Toby Jones and later with Dev Patel bring the required warmth to the proceedings. Dev Patel, though miscast with an accent that doesn't sound Indian at all, makes up for his deficiencies in the concluding portions of the film and make us feel for his character. Toby Jones as Littlewood also shines in his small role, and so does Jeremy Northam as Bertrand Russell. Devika Bhise makes a confident debut as the docile yet headstrong Brahmin wife. The plot moves at a pleasant pace, aided by an equally pleasant background score. The dialogues are well-written with occasional witty jaunts.

The film, however, doesn't make any new grounds when it comes to direction, which is serviceable at best. The Man Who Knew Infinity had the potential to be the next Good Will Hunting, but it chooses to play safe. Though the film shows the turmoils of Ramanujan, it hardly lets us empathise with him, instead moving on to the next scene. His marital strife also ends up as just one of the subplots, when it had the potential to bring more emotional resonance to the story. Even his demise doesn't make much of an impact as it should have had. Also, unless you are a maths nerd, it would be difficult for you to understand what Ramanujan and Hardy are trying to achieve. If it wasn't for the performances, the film would have easily flown under the radar.

TMWKI may not be an Oscar frontrunner, but it is a biopic we, Indians should watch. 'Cos it is about a man whose brilliance was lauded even by other brilliant minds and who was even compared to Isaac Newton, and he was one among us. Also despite the shortcomings, the film is still a compelling watch.