Shraddha Kapoor is currently riding on the success of Stree.

Stree has given everyone in the cast some good reasons to celebrate. The blockbuster movie proved that Rajkummar Rao is one of among the Khans and Kapoors whereas Flora Saini gained popularity, courtesy her portrayal of the ghost in the movie. But it gave Shraddha Kapoor two reasons to celebrate. While she registered a Rs 100 crore movie in her career, the actress also witnessed a milestone on her Instagram account. Also Read - Trending entertainment photo gallery: Alia Bhatt, Kangana Ranaut, Vicky Kaushal, Saira Banu and more celebs viral pictures of the day

The actress’ fan base has increased, and it is evident from her Instagram account. Given the numbers as of today, she has more followers than Alia Bhatt on the social media platform. The two actresses have been on a neck-on-neck as concerns the follower number game and the recent numbers prove that Shraddha is becoming more popular. The Stree star holds 23.7 million followers whereas the Raazi actress has a follower count of 23.6 million. The number is still neck-on-neck but as of now, Shraddha is taking the lead. Also Read - Nandamuri Balakrishna makes a statement on Jr NTR's political entry and it leaves us confused

Shraddha’s fan base on the social media platform also comes on the heels of the release of Batti Gul Meter Chalu. The actress, who shares the screen with Shahid Kapoor and Yami Gautam, would be looking at registering yet another success before the month ends. She plays Shahid’s love interest in the movie. After which, she could garner more followers courtesy her role opposite Telugu superstar Prabhas. The actress will be seen with the Baahubali actor in the multi-lingual Saaho. Her hands are full with the Saina Nehwal biopic after that and then she will be seen in Stree 2. Also Read - Trending entertainment photo gallery: Alia Bhatt, Shehnaaz Gill, Nora Fatehi, Rubina Dilaik and more unmissable celeb pictures of the day 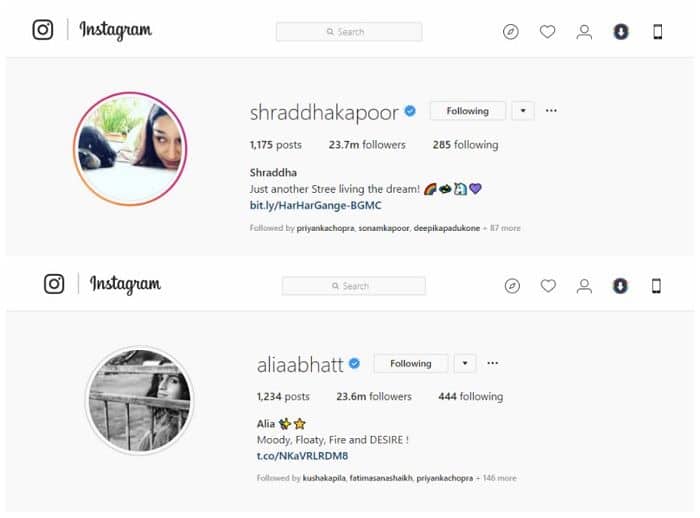 On the other hand, Alia has been in the news for her relationship with Ranbir. On the work front, she recently wrapped the filming of Brahmastra, and has returned to the sets of Kalank. It has been also announced that she will be seen in Sadak 2 with Aditya Roy Kapoor.