Vidya Balan is one of the best actresses of Bollywood of all time. In her twelve years of career in Bollywood, she has given us gems like Parineeta, Lage Raho Munna Bhai, Kahaani, The Dirty Picture, Bhoolbhulaiya etc. In fact even if the films of her haven't worked at the box office, her performance has always been appreciated be it Ghanchakkar, Bobby Jasoos or recent Begum Jaan. Well after delivering a power packed performance as the badass begum in the underperforming Begum Jaan, Vidya Balan is busy shooting for her next titled Tumhari Sulu. In the film Vidya plays the character of a Radio Jockey, a second time in her career after much loved Lage Raho Munna Bhai. Also Read - Akshay Kumar, John Abraham, Shahid Kapoor and more stars whose Bollywood blockbusters are remakes of Malayalam classics

While the film will be slated for a December 2017 release, we have got our hands on the leaked first look pics of Vidya Balan from the film. In the leaked pic, Vidya is seen in a white printed sari with a broom in her hand as she walks out of what looks like a shop. From the look of it, we believe it's her look from the film Tumhari Sulu. Also read: Vidya Balan tries avoiding a fan and we have it captured in 5 clicks Also Read - TOP Bollywood celebs who have failed to fight off their odd BAD habits

Check out the pic below: Also Read - Deepika Padukone, Kangana Ranaut, Alia Bhatt and more: TOP 10 Bollywood actresses with the most number of hits 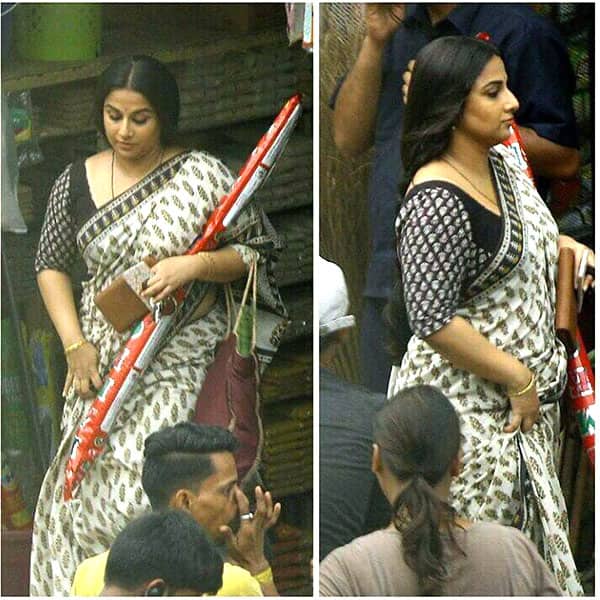 Tumhari Sulu is slated for December 1, 2017 release and is directed by Suresh Triveni who has a host of TVCs to his credit, including IPL’s India-Pakistan Mauka Mauka spot, which became an overnight sensation. She will play the lead Sulochana, fondly known as Sulu. Sulu lands herself in an unexpected job of an RJ, who anchors a late-night show, known for its voyeuristic quality and semi-adult content. Also read: Amitabh Bachchan and Rishi Kapoor's 102 Not Out to clash with Vidya Balan's Tumhari Sulu

The film also stars Neha Dhupia, Manav Kaul among others. The film will see a clash with Amitabh Bachchan-Rishi Kapoor starrer 102 Not Out, which is also slated for the same day release.

Let us know what y'all think of Vidya Balan's look...