Sonam Kapoor s secret affair with businessman Anand Ahuja has surprised everyone. Though the actress is a social butterfly, she has managed to keep her affair a hush hush one.

The Neerja actress is secretly this business man and we were clueless till now..

Sonam Kapoor’s secret affair with businessman Anand Ahuja has surprised everyone. Though the actress is a social butterfly, she has managed to keep her affair a hush hush one. There has been a lot of buzz about the fashionista dating the Delhi based businessman. According to a leading tabloid, Sonam has been in a relationship with Anand for about two years now and is quite serious about him. Add to that, word is that even the families have approved of their relationship. Yes! Also now we have got our hands on one of the picture of the lady which proves that she is indeed in an relationship with Anand. Also Read - From Shilpa Shetty Kundra to Sonam Kapoor: 12 Bollywood actresses who got married to successful, famous and super-rich husbands

Over the weekend, Akshay Kumar hosted a party in the honor of Hollywood sensation Will Smith, where he had invited all the young guns of B-town which included Sonam Kapoor. Sonam did attend the party and along with her beau Anand Ahuja. Don’t believe us? Anand shared a picture of him with Will and his ladylove. This picture indeed will raise eyebrows and only speaks volumes about of them being very much in love. We also checked Anand's Instagram profile and noticed that the lovebirds often have conversations like usual lovers. You will notice that Sonam has commented with emoticons on all of Anand’s posts and its quite adorable. Well, we are very happy for the gal as she has finally found the love of her life. What say guys? Also Read - Sonam Kapoor gets massively trolled for her blue jacket and skirt outfit as she flies home from London; 'Lol cabin crew clothes borrowed' 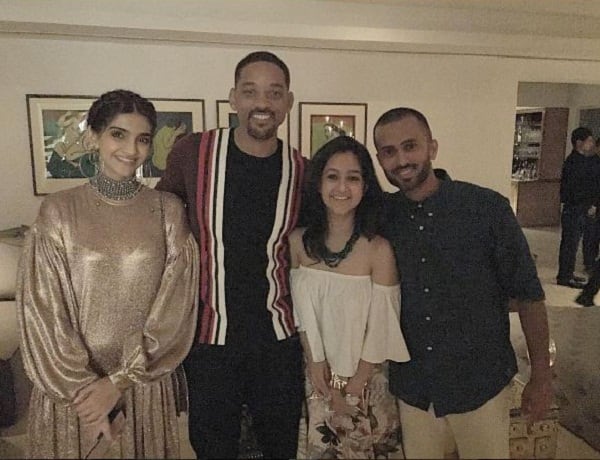 Also Sonam’s relationship has often grabbed eyeballs ever since she made her Bollywood entry. The actress was firstly linked up with her co star Ranbir Kapoor however they never spoke about it. Later she was hooked up with filmmaker Punit Malhotra and businessman Sahir Berry. Sonam was also captured by shutterbugs with Sahir quite a few times. But like always the fashionista never divulged any details about them. And now looks like the actress has moved from her past and has found new love in Anand Ahuja.

So Bollywoodlifers what do you have to say about Sonam’s beau. Drop your thoughts in the comments section below.