Jagga Jasoos is slated to release on July 14

Before the we get to see the entire world of Jagga Jasoos unfold in front of our eyes on the big screen, a small glimpse at it is coming our way. Another full-fledged trailer of the Ranbir Kapoor and Katrina Kaif-starrer will be released later in the evening. Yay...we got our hands on two stills from the movie, which we are presenting here to pique your excitement. In one still, we see Ranbir looking at something with a hint of horror on his face. But standing right next to him is his friend with a smile on his face, staring in the same direction as Ranbir. What could it be that they are looking at? We are thrilled for the release of the theatrical trailer now. Also Read - BREAKING! Aditya Roy Kapur to play his first double role in the Bollywood remake of Arun Vijay's Tamil hit, Thadam – deets inside 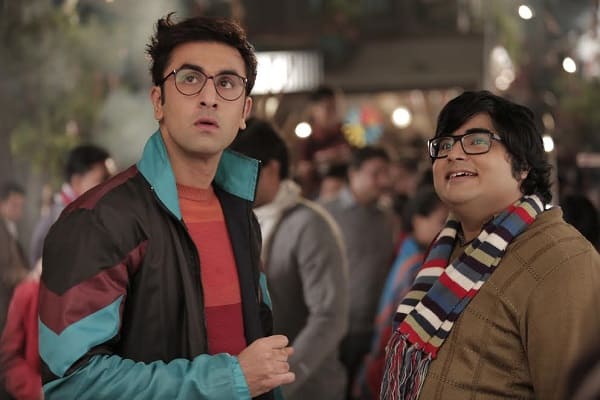 The second one is a behind-the-scenes still and has intrigued us even more. In this picture posted by Katrina Kaif on her Facebook, we see the two stars chatting up against the backdrop of a landscape. A steam engine train is crossing the tracks right in front of them. The shot is visually spectacular, and catches the candidness of the atmosphere on the sets. We have got to say that we are impressed by these BTS pics of the film. Earlier, it was the attack by the seagulls video that had left us in awe of the sites that this movie was shot at. Before that Katrina trying to calm down an acrophobic Ranbir before doing a stunt melted our hearts. Also Read - KGF Chapter 2, Shamshera and more: All you need to know about Sanjay Dutt’s upcoming films

In the first look video of Jagga Jasoos, there was not a single dialogue uttered by the two actors. In fact, it was not until the third song of the film, Jhumri Talaiyya, that we heard the two of them say anything in Jagga Jasoos. Even in Jhumri Talaiyya, all we heard them saying was "Fire...Fire!" That's it. We are so hoping that we get to hear the two characters having a conversation in the upcoming new trailer.

Jagga Jasoos is slated to release on July 14. The movie, directed by Anurag Basu, seems like a cross between Barfi! and the hit comic book, The Adventures of Tin Tin.