Hint: He is our latest crush!

This actor has been making us root for him everyday eversince his magnum opus hit the theatres. If we are crushing on him, we are also amazed at the way his Telugu film has broken records in 2017. Guess who we are talking about? Yes, it is Prabhas. The actor and his film Baahubali 2 just can't stop making heads turn. It has not only become a craze in India but worldwide as well. Although we aren't hugely surprised by this, it did pleasantly shock us. It's because we never thought the film had become so big to become a global phenomena. Now we know it is the biggest hit of Indian cinema with over Rs 1200 crore in its kitty as its worldwide collection. But the fact that it has left an impression on the global audience itself is quite fascinating to realise. Thus, it claimed the seventh spot on Google's list of Top 10 movies of 2017 and by doing so it has left Chris Hemsworth's Thor: Ragnarok behind! Also Read - Thanos creator Jim Starlin thought Avengers: Infinity War would be 'piece of sh*t' like Justice League – here's why

It's simply amazing! Honestly, from the moment we unearthed this story, we were going berserk thinking about it. It's so unbelievable in a happy kind of way. It's such a proud moment for India where a regional film has managed to do something that Bollywood films couldn't. That's the power of good cinema. Audience doesn't care what the language is. As long as the end product entertains them, they are game for it. It's a true triumph for S S Rajamouli, Prabhas and the entire team of Baahubali! Check out the full list right here... Also Read - Before Russell Crowe, Christian Bale, Ben Affleck and others have featured in both Marvel and DC movies 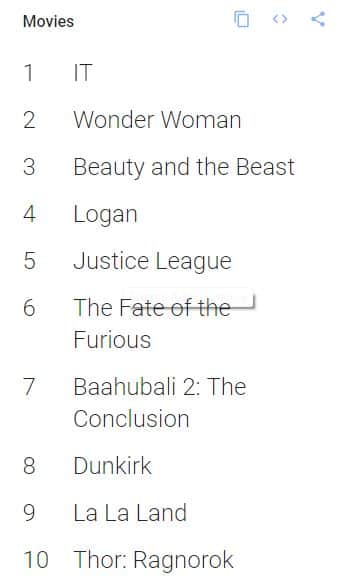 Baahubali 2 totally deserves this feat. No film has managed till date to blend entertainment with such a rich content and mount them on a big scale. It's an achievement which will take time for people to forget. In fact, whatever trade says, Baahubali 2 will always be a benchmark with which other films will be gauged. Standards have been set and now it might seem unreachable, but Baahubali 2 has proved it's doable. Congratulations, team Baahubali!