Tell us one person who hasn’t enjoyed Jonas Brothers’ Sucker. The catchy dance number is everything we needed to kick off the musical summer of 2019. The hit track sees Nick Jonas, Joe Jonas and Kevin Jonas aka the Jonas Brothers reunited after a long hiatus. And fans are loving the song. The song is already on the top of several musical chart numbers and we’ve got it on loop. Turns out, we’re not the only ones hooked to the song. Panipat star Arjun Kapoor too cannot get enough of Sucker. The actor recently took to Instagram to share a screenshot of the song. He admitted that the song has been on loop for a while now. Also Read - Malaika Arora is getting trolled for her duck walk; here's how the diva has dealt with CRUEL trollers over the years

The actor shared the screenshot with the message, “I’m a sucker for this song!!! On loop.” He tagged Nick and Priyanka on the photo. His Gunde co-star took no time to respond to the shout out. The actress shared Arjun’s story and confessed that she too was hooked to the song and it has been on loop. Check out their Instagram Stories below: Also Read - Trending Entertainment News Today: Shilpa Shetty and Raj Kundra put divorce rumours to rest; her bodyguard wins hearts and more 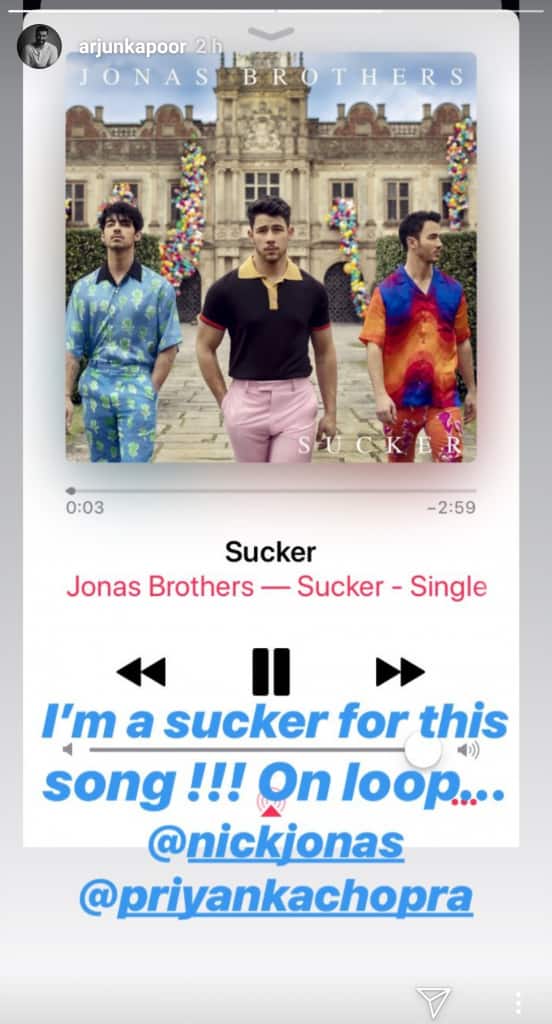 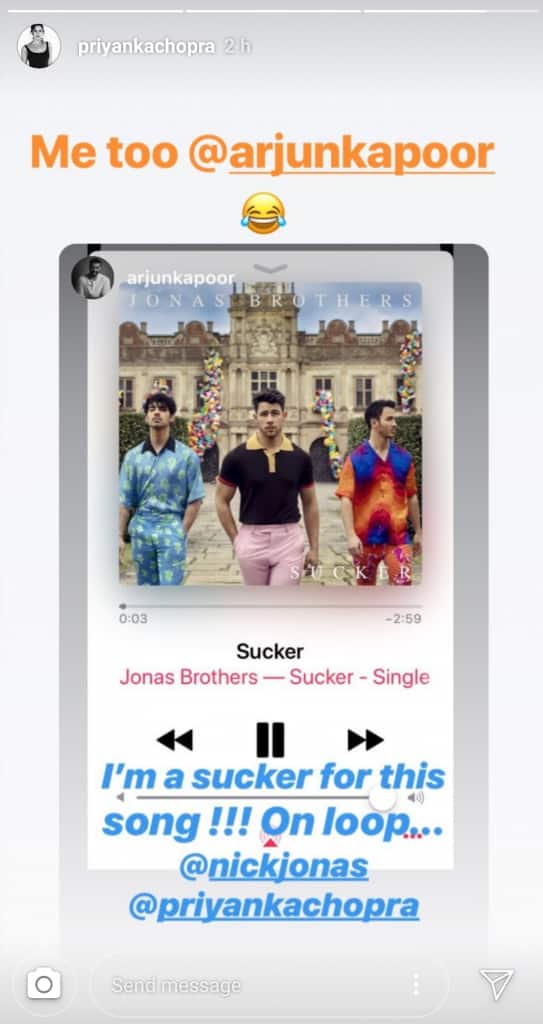 While the audio of the song is catchy, the video of the song has everyone’s attention as well. The quirky video features Nick’s gorgeous wife PeeCee along with Kevin’s wife Danielle Jonas and Joe’s fiancé and Game of Thrones actress Sophie Turner. Fans went gaga watching the Jonas Brothers, along with their partners in the video. Here’s the video because the video deserves to be watched several times.

On one hand we cannot get over Sucker, on the other the Jonas Brothers has dropped their second song titled Cool. While the new video doesn’t feature the ladies from the first, it does have an addictive ring to it. Haven’t heard it yet? Check it out below:

While PeeCee has been supporting her husband’s musical career, she will be soon be seen The Sky Is Pink. She will share the screen with Farhan Akhtar and Zaira Wasim. Stay tuned to BollywoodLife for more gup from the industry!