This picture of Shah Rukh Khan and Amitabh Bachchan will make you DEMAND a Mohabbatein repeat!

The actors look amazing in this picture and we are beaming with pride! 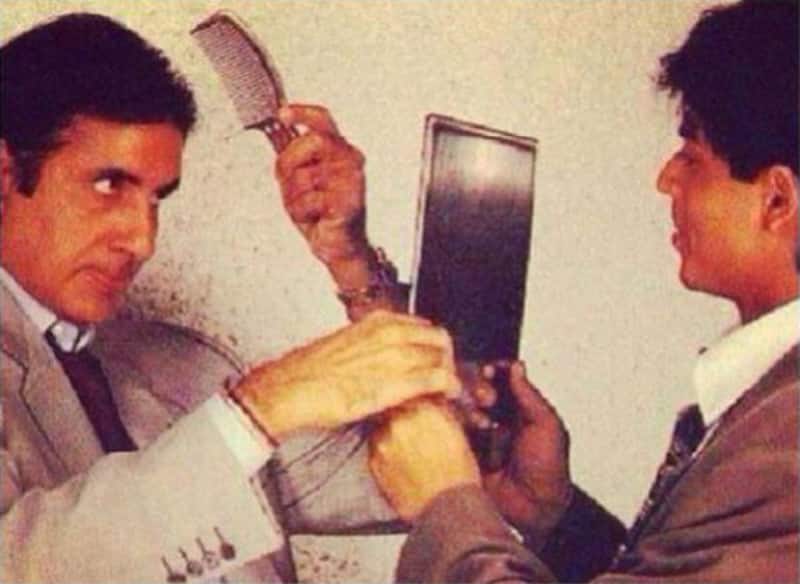 Baadshah and Shahenshah together...too much fun!

For us, Bollywood stars never age. They were perfect, they are perfect and they always will be perfect. Our love for them is unconditional. So we always want our stars to be in harmony with each other because that's when we get some of the best clicks like this rare picture of Amitabh Bachchan and Shah Rukh Khan which will make you go Aww! They are the Shahenshah and Baadshah of Bollywood and when they come together, it's nothing less than grand! This image proves what they can do to your senses if they are in a single frame. This is a picture of Shah Rukh and AB's first cover shoot for a magazine. The Dilwale actor last year had tweeted this and one more picture from this shoot saying, "My 1st ever foto shoot with the Maestro.I remember I rested my hand on his shoulder ever so lightly lest I ‘soil’ him." That's the respect SRK has for AB talking in this post. Nobody can match the awesomeness of the Bachchan! He is just INCREDIBLY good actor! Check out the lovely tweet here: Also Read - Shah Rukh Khan's son Aryan Khan royally ignores Ananya Panday after she confessed to having a crush on him [Watch Viral Video]

My 1st ever foto shoot with the Maestro.I remember I rested my hand on his shoulder ever so lightly lest I ‘soil’ him pic.twitter.com/oEFTs3vbOB

The picture has AB getting his hair right while SRK held the mirror. Although it's SRK's side profile, you can still make out the mischief on his face. This image should go down in Bollywood's wall of fame if there is one! What say people? Also Read - Adipurush: Before Prabhas-Kriti Sanon starrer, these Shah Rukh Khan, Ajay Devgn films were heavy on VFX