Tickets for Salman Khan's Sultan are selling out with the speed of Flash - here's proof!

Salman Khan's Sultan is already housefull at Gaiety Cinema for the opening weekend! 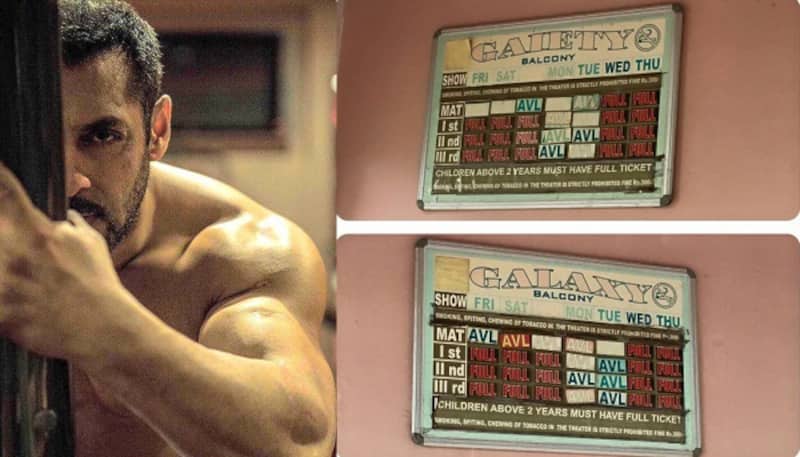 Salman Khan is presenting Sultan this year on Eid. The movie is a sports drama with a hint of romance in it. The trailer is a rage on the internet. It has already crossed 22 million views on Youtube. All the songs are topping the itunes charts. Clearly, the fans are eagerly waiting for Sultan to release. Well, since a picture speaks a thousand words, this one is a proof that you might not get to watch the film over its opening weekend as theaters are already nearing housefull with advance bookings. Also Read - Shah Rukh Khan, Aamir Khan, Salman Khan and more biggest superstars of Bollywood and their first salaries

A picture is going viral on social media that shows the show roster of Gaiety Cinema Galaxy Cinema. And it's not a surprise the weeknd shows are already sold out.Whoa! Now that's called Salman fever! The single screen theater is pretty famous amongst the masses and specially Bhai fans. Also Read - Kareena Kapoor Khan to Aishwarya Rai Bachchan: Bollywood actors who were labelled as MOST arrogant

But don't you dare think this is just the case with single screen cinemas. Even the multiplexes are getting a phenomenal response for Sultan's advance booking! Recently, trade expert Taran Adarh tweeted stating that the response received at the box office for advance booking was phenomenal! He tweeted. “#Sultan advance booking TERRIFIC… Expect a HURRICANE at the BO, when the film opens on Wed.” Also Read - Bigg Boss 16: Sumbul Touqeer Khan to Abhinav Shukla – contestants who were called undeserving on Salman Khan's reality show

Nevertheless, trade pundit Komal Nahta is more certain of the success of the Ali Abbas Zafar directorial. “There are all chances of it being Salman’s biggest ever. At least one of his biggest for sure. Music, craze, dialogues, trailers… Everything is highly talked about. Box office history is waiting to be rewritten,” he said.

Sultan is about a wrestler who has problems in his professional and personal life, and needless to say, Salman — who at 50, has one of the best physiques in tinsel town — has gone all out to be in his fittest frame for the movie. It directed by Ali Abbas Zafar and also stars Anushka Sharma, Randeep Hooda and Amit Sadh in key roles. The music has been composed by Vishal Shekhar, who have done fabulous job. Even Salman Khan himself couldn't resist covering most of the songs in his own voice.

This is what the #Sultan opening weekend is looking like at the moment (Via FB). pic.twitter.com/ynapUebU4w