Tiger Shroff gave the performance of a lifetime on Filmfare 207 stage which left everyone floored. One of the best part of the show was Shah Rukh Khan introduced him on stage as the son of his friend which makes Tiger his own son. SRK, how do you do it every freaking time! How do you manage to steal our heart with just a small sentence? Sigh...guess we need a completely separate story for him. Coming back to Tiger, the actor was simply fascinating. But we got engrossed in his performance so much that we didn't notice something that happened just behind him. Two of his back dancers got their pants ripped. OOPS! Also Read - Filmfare Awards 2017: Alia Bhatt pulls off a Kareena Kapoor Khan and we are FLOORED

Tiger was superlative. He danced on his songs and on Hrithik Roshan's Dhoom machale. He paid tribute to Hrithik so beautifully that now we know no one else could have done it. He was simply perfect. He then moved on to Prabhudheva and moved on Muqabla. Tiger is so talented, a hint we saw on stage. But no offence Tiger, we couldn't help ourselves from noticing it. In fact, Tiger too was oblivious of this occurrence because he shared an image from his performance where the mishap is clearly visible. Check it out right here. 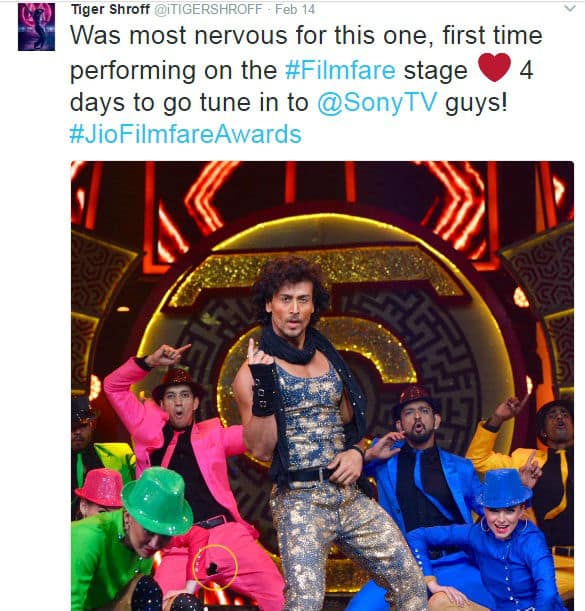 Workwise, DNA reported that Tiger’s last film A Flying Jatt didn’t work well at the box office but he has a lot of offers in hand. Karan Johar has announced Student Of The Year 2 with Tiger and Sajid Nadiadwala, too, has decided to make Baaghi into a franchise. And the decision has been made. Tiger will start SOTY 2 first before moving on to Baaghi 2. Tiger confirms, “We begin shooting for Student… first and then we also start Baaghi 2 in the latter half of the year.”