Akshay Kumar, Kartik Aaryan, Ajay Devgn, Sumbul Touqeer Khan, Urfi Javed and more have made it to the TOP Newsmakers from the Entertainment world. Here's a lowdown on the same... 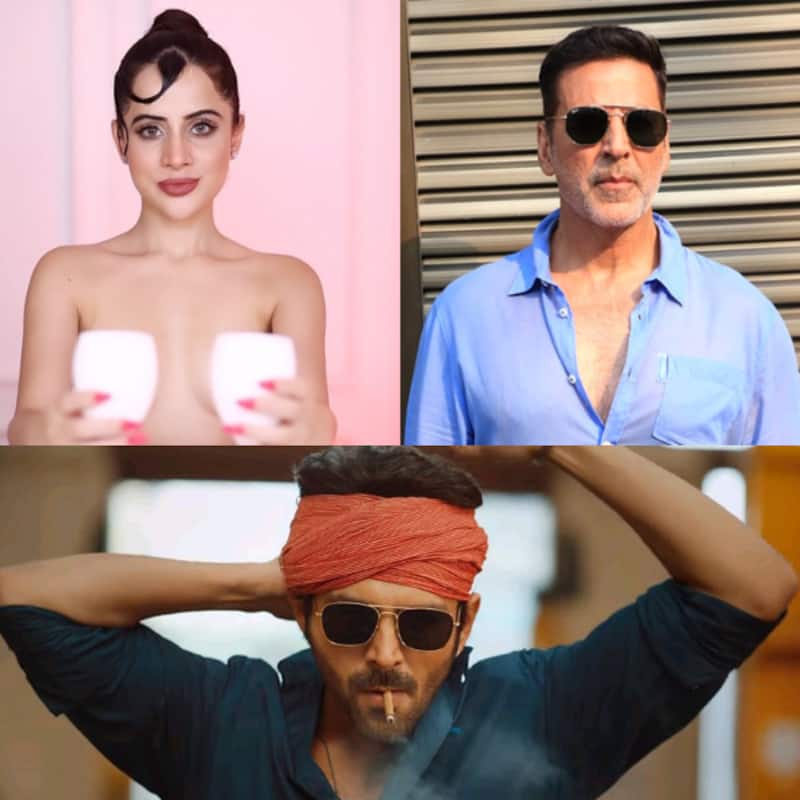 Two new film teasers dropped today, both, interestingly, adaptations of South films. We are talking about Ajay Devgn starrer Bholaa and Kartik Aaryan starrer Shehzada. Akshay Kumar has left the producer of Hera Pheri 3 very upset. Vijay Deverakonda and Rashmika Mandanna's wedding picture is going viral. Bigg Boss 16 contestant Tina Datta's mom lashes out at Sumbul Touqeer Khan's father. Urfi Javed has set the temperatures soaring, and a lot more. It's time to give a wrap on the top newsmakers from the entertainment world. It is as if the entertainment industry never sleeps. Let's catch up on the top entertainment newsmakers of the day. Also Read - Akshay Kumar, Shah Rukh Khan, Kartik Aaryan and more: Here is a look at the 2023 line up of top Bollywood heroes

A couple of hours ago, Ajay Devgn gave a glimpse of the teaser of his next, Bholaa. The film is a remake of Karthi starrer blockbuster film by Lokesh Kanagaraj, Kaithi. Ajay Devgn has impressed viewers with his acting chops. The fans are hailing him for making such a good remake of Kaithi. Check out the reactions of the masses here. There were also reports of Salman Khan being approached for the sequel. However, the makers refuted the claims that Ajay has approached Salman. Also Read - Trending Entertainment News Today: Akshay Kumar to return to Hera Pheri 3, Deepika Padukone to unveil FIFA World Cup 2022 trophy and more

So, it's the birthday of Kartik Aaryan today. And he is trending big time in Entertainment News. He dropped the teaser of Shehzada as a return gift for his fans on his special day. Since it is an adaptation of Allu Arjun starrer Ala Vaikunthapurramuloo, Kartik got compared to the massy star from the South big time. However, Shehzada has got mixed reactions. Check out the whole story here. Also Read - Kartik Aaryan in Freddy to Kriti Sanon in Mimi; A look at actors who put on weight for their movies [Watch Video]

Akshay Kumar had opened up on not doing Hera Pheri 3 a couple of days ago wherein he said that he was not happy with the script and hence, he opted out of the film. Well, this has not gone down well with producer Firoz Nadiadwala who, as per reports, will not work with Akki in the other two films he planned – Awara Paagal Deewana 2 and Welcome 3. Read more details about the story here.

No, they are not! But fans wish to see Vijay Deverakonda tie the knot with Rashmika Mandanna. The two celebs have worked in films together and fans have loved their chemistry. And hence, someone edited a picture of Vijay and Rashmika together as a married couple. IT went viral in no time. ICYMI, check out the picture here.

She has done stones, she has done cassette reels, she has also done shells, plastic, chandi wark, shards of glasses and WHAT NOT. Urfi Javed loves to experiment with fashion. It is bizarre but out of the box. These unique ideas of Urfi Javed have been going viral for a long time. And after mobile covers, she has now taken to wine glasses. Check out the video below:

SS Rajamouli's father KV Vijayendra Prasad opened up on the art of story-telling and writing process. In an interview with Pinkvilla, reports Koimoi.com, KV Vijayendra Prasad said that there are stories all around us. There are epics like Mahabharat, Ramayan or real-life incidents and such. He said that one has to create something out of nothing.

There have been reports about Ibrahim Ali Khan is soon going to enter Bollywood. The assistant director is going to be launched as an actor by Dharma. He will be directed by none other than, Boman Irani's actor-director son, Kayoze Irani. Ibrahim will go down to Meerut in about a month or two and begin shooting, reports ETimes.

Tina Datta and Sumbul Touqeer Khan don't share a very good equation with each other. They both have been fighting about who likes Shalin Bhanot and who doesn't inside the house of Bigg Boss 16. Tina has been claiming that Sumbul is in love with Shalin. The Imlie actress has denied so. Sumbul's father had a chat with her again and he asked her to show it to Tina Datta and Shalin Bhanot. Sumbul's father's words have not gone down well with a lot of people. And even Tina Datta's mother have reacted to the same. She said that the words used by Sumbul's father have deeply hurt her. Check out the video here:

Rajeev Sen reveals he is in touch with Charu Asopa

Rajeev Sen and Charu Asopa are heading for divorce. They both have had nasty public spat video videos and interviews wherein they both levelled allegations on each other. Now, the two have been staying cordial and maintaining distance. Rajeev recently revealed that he is in touch with Charu over WhatsApp and has been sending her nice messages. He said that he is doing so because he wants Zianna to be happy. He also asked people to give her love, sympathy and everything.

BTS member Jungkook might be back in South Korea, but he is still the talk of the town for his performance at the FIFA World Cup 2022 on Dreamers. The Golden Maknae of bTS was compared to the late legendary pop icon Michael Jackson. You read that right. Well, ARMYs cannot believe it. Their baby kookie is going places and is being compared to legends. Read out the whole story here.

That's all in the Entertainment News today.