Top newsmakers of the week: Vijay Deverakonda’s mysterious girlfriend, NTR biopic, Devadas trailer and many others who made it to the list

We look back at this week and see what kept us occupied all through.

Nani-Nagarjuna starrer Devadas trailer, Kavya Madhavan baby shower and posters of NTR biopic, this week was an eventful with quite a few activities. While the big-ticket Saamy Square released this week, Malayalam film Varathan and Telugu film Nannu Dochukunduvate too released with quite a few to binge on. We look back at this week and see what kept us occupied all through. Also Read - NTR Biopic: Balakrishna and Sumanth turn smoke buddies in this latest poster and it is pure gold

This is one of the most watched out for in Tollywood and the posters released this week just made the wait harder. First look poster of Sumanth as Akkineni Nageswar Rao was unveiled which stunned the audience. And a day later, a poster of smoke buddies Sumanth as ANR and Balakrishna as NTR was unveiled. We went back in time and looked up the poster just to make sure we were not looking at the real ones, that convincing the poster was. Also Read - Not just Keerthy Suresh bears resemblance to Savithri but Naga Chaitanya also shares a striking resemblance to ANR

Nithya Menen or Varalaxmi Sarathkumar - Which actress should play Jayalalithaa in The Iron Lady? - vote now

September 27th, 2018 is when Devadas starring Nani and Nagarjuna will release and to set the mood, the makers released the trailer of the film at the audio launch. The trailer has everything a movie-buff asks for and promises the film will be a laugh riot. First day watch!

I don’t know what you are talking about @NameisNani ... all I know is its going to be a festival of fun from September 27th?enjoy our theatrical trailer #DevaDas ??? https://t.co/SDUerqXQkv

Malayalam couple Dileep and Kavya Madhavan are expecting their first child and the baby shower for the mother-to-be was held this week. And interestingly, it was also Kavya’s birthday the same day. The double celebrations were attended by close family and friends and Kavya Madhavan looked pretty in the pics.

Vijay Deverakonda and his mysterious girlfriend:

Pictures of Vijay Deverakonda and a mysterious Belgian girl wen viral on social media and the rest is history. Fans of the Rowdy star were quick enough to throw in their assumptions about his relationship status. We found out that the girl’s name is Virginie and is a Belgian resident. Apparently, there are love flames between the Arjun Reddy actor and Virginie. 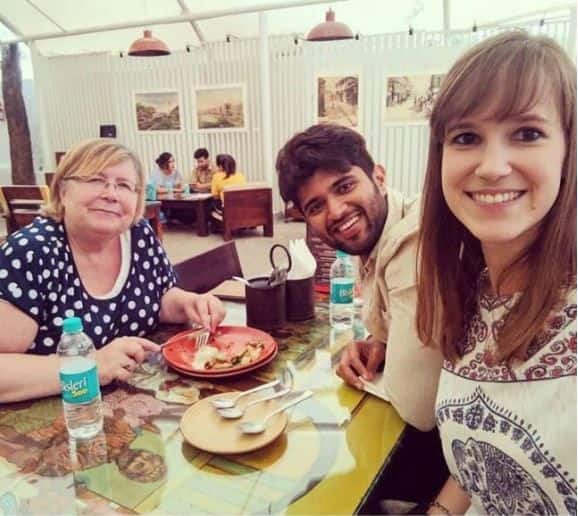 An official announcement about a biopic on legendary actress and late former Chief Minister Jayalalithaa was announced and is titled The Iron Lady. The first look poster was unveiled by director A.R. Murugadoss and the film will be directed by Priyadhaarshini. But the real confusion is who would be playing AMMA in it? Reportedly, Varalaxmi Sarathkumar and Nithya Menen are the front-runners for the lead role.

Extremely happy and excited to launch the Title poster of #Jayalalithaabiopic #THEIRONLADY I wish @priyadhaarshini and team for a grand success.. pic.twitter.com/4c87Xxks74