After Ranbir Kapoor, Brahmastra's Alia Bhatt has tested positive for coronavirus too. The actress took to her social media handle to confirm the news. Check out Alia Bhatt's Instagram story here:

The covid-19 pandemic is not contained and looks far away from getting contained any time soon. Recently, a lot of celebrities had tested positive for the novel coronavirus. Right from Kartik Aaryan, Siddhant Chaturvedi, Bappi Lahiri, to Paresh Rawal, R Madhavan, Aamir Khan and more, the COVID-19 wave looks stronger than ever. Recently, Brahmastra actor Ranbir Kapoor had been tested positive for the virus. The actor had quarantined himself at home. And now, COVID-19 got its next victim from the sci-fi fantasy movie, Alia Bhatt. There were speculative reports that Alia had been tested positive. She put the rumours to rest by confirming the same in her Instagram story. Also Read - Alia Bhatt and Ranbir Kapoor jet off to Maldives on another vacation after recovering from COVID-19 – view pics

The actress took to her Instagram stories and wrote, "Hello all, I have tested positive for COVID-19. I have immediately isolated myself and will be under home quarantine. I am following all safety protocols under the advice of my doctors. Grateful for all your love and support. Please stay safe and take care." Have a dekko at Alia Bhatt's Instagram story here: Also Read - Ranbir Kapoor and Alia Bhatt trolled for flying to the Maldives amidst COVID-19 pandemic; netizens wonder if they've donated plasma — read tweets 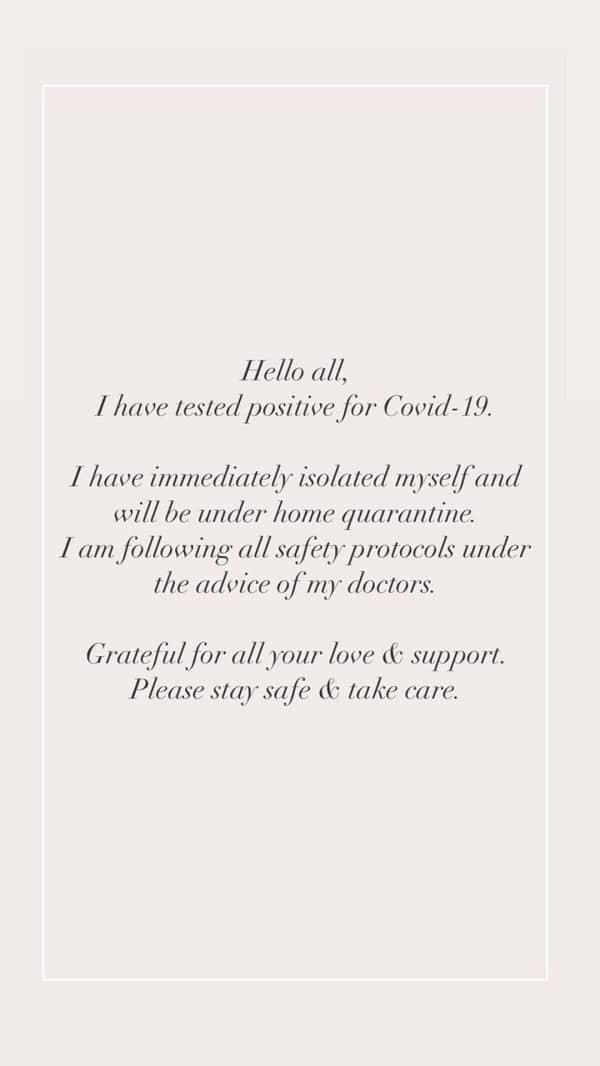 For the unversed, Alia had been shooting for her films such as Brahmastra and Gangubai Kathiawadi and had been looking forward to the shoot other films. The actress has been juggling various brand shoots too. A couple of days ago, her co-star and rumoured boyfriend Ranbir Kapoor had been tested positive. The actor’s mother, Neetu Kapoor had taken to his Instagram handle to share the news of the same.

Talking about Alia Bhatt’s work front, she has Ayan Mukerji’s Brahmastra that also stars Amitabh Bachchan, Akkineni Nagarjuna, Mouni Roy and a cameo of Shah Rukh Khan. She has Sanjay Leela Bhansali’s Gangubai Kathiawadi, a biographical drama film on the life of a madame in the red-light area of Kamathipura. Birthday boy Ajay Devgn has a cameo in the film. She will be making her Telugu film debut with SS Rajamouli’s RRR co-starring Ram Charan, Nr Jr NTR, Samuthirakani, Olivia Morris, Ray Stevenson, Alison Doody to name a few. She also has Karan Johar’s ensemble cast period drama Takht which has been put on hold for now. Apart from that, she’ll turn producer with Darlings which also stars Shefali Shah and Vijay Varma. Apart from these films, it is being said that she will also be seen in Sanjay Leela Bhansali’s remake of Baiju Bawra alongside Deepika Padukone and Ranbir Kapoor.