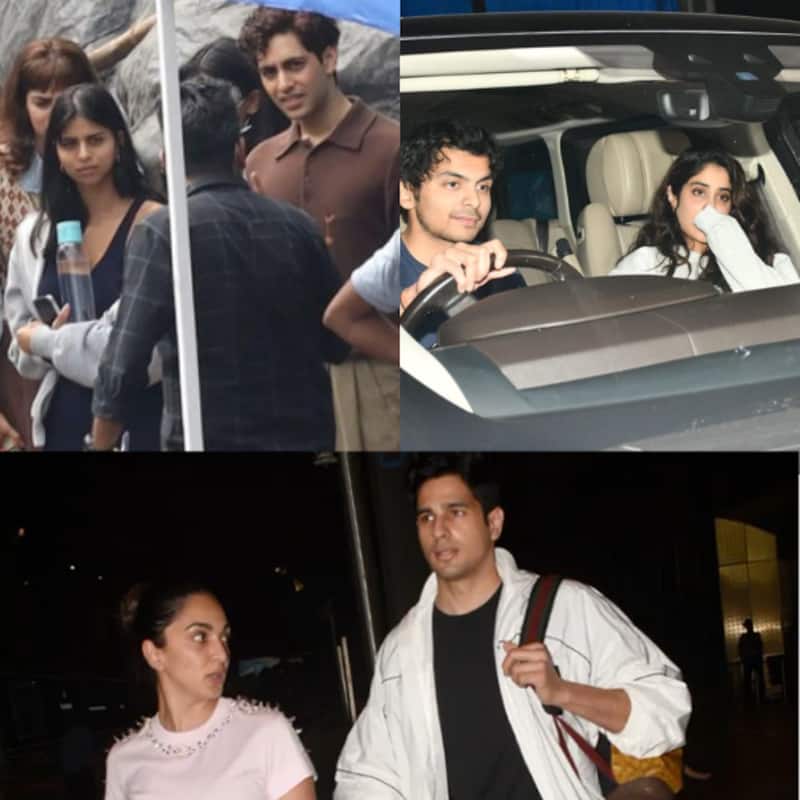 We have loads of updates for you from the world of Entertainment. From wedding rumours to dating rumours to celebs being trolled to some exciting updates about Bollywood films and webseries and more. Suhana Khan-Agastya Nanda, Janhvi Kapoor-Shikhar Pahariya, Athiya Shetty-KL Rahul, Deepika Padukone, Kiara Advani and Sidharth Malhotra and more have made news in the Entertainment News section today. So, you see, a lot happened. Let's catch up! Also Read - Suhana Khan-Agastya Nanda dating: Here is a look at the bond Shah Rukh Khan and Amitabh Bachchan families share

Kareena Kapoor Khan and Karisma Kapoor were spotted in the city today. The two Kapoor khandaan ladies posed for the paparazzi and waved at them as well. However, when some kids approached them to pose for pictures, they went inside. They waved a hi to them but did not pose. The video of the same is going viral. Netizens slammed both actresses for being rude to the kids. Also Read - Suhana Khan, Deepika Padukone, Alia Bhatt and other Bollywood beauties who aced the braless trend with panache [View Pics]

It was Deepika Padukone's birthday today and the gorgeous actress got some surprises from the makers of the films she is gonna star in. Firstly, Deepika's look was revealed from Pathaan. Secondly, the makers of Project K also dropped a poster wishing Deepika Padukone. However, netizens were quick to connect it with Zendaya and Timothee Chalamet starrer Dune. Check out the whole story here. Also Read - Suhana Khan dating Agastya Nanda: Here's a look at Shah Rukh Khan-Gauri Khan's princess and her link ups and crush confessions

Ya'll know that Suhana Khan and Agastya Nanda are soon going to make their acting debut with a Zoya Akhtar-directed adaption of The Archies which is going to drop on Netflix. And now, it is being said that Suhana and Agastya have found love in each other. As per reports, they have been dating for a while the production team of The Archies already know about it. Apparently, even Shweta Bachchan approves of Suhana. Check out more deets here.

Suniel Shetty’s daughter Athiya Shetty is dating Cricketer KL Rahul. They have been together for a long time now. And since last year, there have been reports about the two love birds tying the knot as well. It has been said that Athiya and Rahul might tie the knot in January but that seems a little dicey. And now fresh reports have surfaced stating that Athiya might tie the know with Rahul just like Ranbir Kapoor tied the knot with Alia Bhatt. Check. More deets here.

Samantha Ruth Prabhu has been diagnosed with Myositis and while she is recovering there have been reports that she has been replaced from films and projects. While her team refuted the claims, the actress has a stronger response. Those thinking Samantha's health have become obstacle in her work, well, she posted a picture of her work recently. The actress has begun dubbing for her movie Shaakuntalam. Check her post here:

Shahid Kapoor has collaborated with The Family Man makers Raj and DK. They are coming up with a thriller series called Farzi. It also stars Vijay Sethupathi, Raashii Khanna and others. The makers and Amazon Prime Vidoe dropped the first look of Shahid Kapoor and Vijay Sethupathi from the series. Check out the posts here:

Sunny Deol is soon going to be seen in Gadar 2 which also stars Ameesha Patel, Utkarsh Sharma and others. The film has reportedly locked the Independence Day weekend for the release. Yes, you read that right. As per a report in Pinkvilla, Gadar 2 is releasing on 11 th August. Interestingly, Ranbir Kapoor and Rashmika Mandanna starrer Animal directed by Sandeep Reddy Vanga is also releasing on 11th August. It's gonna be an interesting clash at the box office.

If reports are anything to go by, the Kartik Aaryan starrer Shehzada movie's trailer will be attached to Shah Rukh Khan starrer movie Pathaan which the fans would get to watch in cinema halls. Shehzada is one of the most anticipated films of Kartik. It is slated for an 11 February 2023 release. The theatrical cut of the Shehzada trailer is ready and it presents him in the never-before-seen avatar.

Janhvi Kapoor blushes hard as she is spotted with Shikhar Pahariya

A couple of days ago, reports surfaced stating that Janhvi Kapoor has allegedly reconciled with her former boyfriend Shikhar Pahariya. She was spotted with Shikhar on numerous occasions after that. And now, she was seen leaving in a car With Shikhar. They were seen leaving Rhea Kapoor's residence. Janhvi was seen blushing while the paps clicked her away.

Check out the video of Janhvi Kapoor and Shikhar Pahariya here:

Did Urvashi Rautela visit Rishabh Pant in the hospital?

Rishabh Pant met with a deadly accident recently. He was brought to the Kokilaben Ambani hospital recently. His treatment is been taken care of by BCCI. Urvashi Rautela has been dropping cryptic posts ever since. And now, the actress shared a picture of Kokilaben Ambani hospital. It sparked rumours that she visited Rishabh in the hospital. Check out the picture here:

No Hollywood at Sidharth Malhotra and Kiara Advani's wedding?

Shershaah actors Kiara Advani and Sidharth Malhotra are reportedly going to tie the knot in February. They will be tying the knot in Jaisalmer, state reports. And as per the latest buzz, they will have a strict family-only guest list. The only two people from Bollywood who are likely to be invited are Karan Johar and Ashvini Yardi, states a report in Bollywood Hungama. It is said that they might throw a part for the film friends later.

Shah Rukh Khan and Deepika Padukone starrer Pathaan has been grabbing headlines a lot in the entertainment news section lately. Just recently, a video of a protest at a mall in Ahmedabad went viral. Pooja Bhatt took to her Twitter handle and shared her views on it. She defined what it means to have a protest and what is a riot. Check out her tweet here:

Protest-An organised public demonstration of disapproval”(of some law,policy,idea,or state of affairs)
Riot-A disturbance of the peace created by an assemblage of people acting with a common purpose & in a violent/tumultuous manner to the terror of the public” https://t.co/QC3AY389gD