Shilpa Shetty, Raj Kundra, Fahadh Faasil, Kamal Haasan, Puneeth Rajkumar, BTS and others are our part of our entertainment news today. So, let's meet these newsmakers... 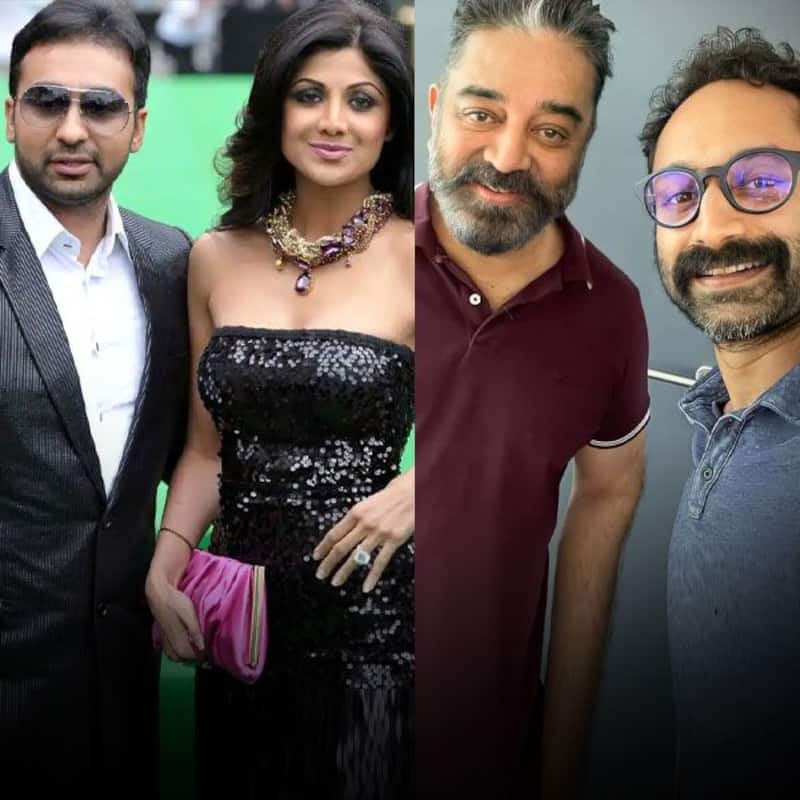 As you are enjoying the Sunday, we take you through the highlights of the day, where all the biggies of the entertainment industry grabbed the headlines. Shilpa Shetty, Raj Kundra, Fahadh Faasil, Kamal Haasan, Puneeth Rajkumar, BTS and others are our part of our entertainment news today. So, let's meet these newsmakers... Also Read - Trending South News Today: Ponniyin Selvan actress Trisha Krishnan's BTS pictures go VIRAL, Chris Hemsworth to have a cameo in Mahesh Babu's film and more

Shilpa Shetty Kundra had an heated arguement with her husband when he was brought to his house by the police Also Read - Ponniyin Selvan I: Mani Ratnam REVEALS THIS Bollywood star is a part of the film; says 'couldn't afford' movie with Kamal Haasan

Hungama 2 actress Shilpa Shetty Kundra's husband Raj Kundra has been in the limelight for the past couple of days. The successful businessman has been accused of producing and distributing adult content through apps. He was earlier sent into judicial custody till July 23 by the Mumbai court, but his custody got extended till July 27. Also Read - Ponniyin Selvan I: Aishwarya Rai Bachchan, Chiyaan Vikram, Trisha Krishnan and other actors' fee for Mani Ratnam's movie will leave you shell-shocked

Read the full story here: Raj Kundra pornography case: Shilpa Shetty Kundra had an heated arguement with her husband when he was brought to his house by the police – read report

After the blockbuster success of Master, director Lokesh Kanagaraj has collaborated with Kamal Haasan, Vijay Sethupathi and Fahadh Faasil for Vikram. While the film went on floors on July 16 with Ulganayagan and Makkal Selvan scenes, Fahadh has now joined the sets and the actor's selfie with Kamal Haasan has now taken the social media by storm. Fans are going crazy over this image as they have captioned it, 'Velu Nayakkar meets Ali Ikka'.

In the start of the month, we saw the Power Star of Kannada industry, Puneeth Rajkumar shared the poster of his upcoming psychological thriller drama titled Dvitva, which will be directed by U Turn helmer Pawan Kumar and produced by Hombale Films, the banner behind KGF franchise and Salaar. While the poster garnered a thunderous response from fans, the latest reports suggest that the versatile actress Trisha Krishnan has come on board as the female lead. The actress has loved the script and the film is set to go on floors in September.

In the last week, we saw President Moon Jae In appointing BTS aka Bangtan Boys as as special envoys of Korea's growth and culture in order to "expand the country's diplomatic strength and outreach on a global level, during a time when South Korea's status within the international society is gaining greater recognition." This move will be extension of President's diplomacy, which serves the purpose of a "collaborative effort with professionals in the field of the civic culture whose stage is the world, to enhance South Korea's image as a nation which takes the lead in global issues."

Disha Patani wears her dancing shoes as she performs on Spicy

Bollywood actress Disha Patani shared a new dance video on her Instagram wherein she was seen performing to Ty Dolla $ign's song Spicy. The actress was accompanied by a choreographer in the dance video. In the video, Disha donned a pair of loose pants along with a full-sleeved mustard sweatshirt and tied half ponytail. She captioned the video as, "Juss chillin choreography @ankan_sen7 shot @shariquealy #spicytydollasign." Her rumour boyfriend Tiger Shroff seems to be impressed with her dance moves and he commented saying, "Clean" along with fire and a heart-eyed emoji. Tiger Shroff's sister Krishna Shroff dropped a fire emoji.