Sanjay Dutt's daughter Trishala had always been away from the limelight but in the past few years she has earned a following of her own. Recently, there were rumours that everything was not okay between Sanjay Dutt and her. Reports suggested that Sanjay did not reach out to her after the demise of her boyfriend. Post that, we saw that Trishala and Maanayata were interacting on social media. Well, Trishala was having a chat on Instagram with her social media fam, and they asked her if the reports of the fall-out was indeed true. She replied, "Please don’t believe everything and anything that is written in tabloids. I don’t know where or who that came from but no, that’s not true." This should end the gossip and speculation. The young lady is recovering emotionally from the demise of her Italian boyfriend. Also Read - Trending South news today: Sanjay Dutt's deadly new look from Yash's KGF 2 unveiled, Prabhas wraps up the shooting of Radhe Shyam and more

Trishala is Sanjay Dutt's eldest child born from his first wife, Richa Sharma. They got married in 1987 and she was born in 1989. Richa moved to New York after she was diagnosed with brain tumour within two years of her marriage. She passed away in 1996. There was no mention of her in Sanjay Dutt's biopic, Sanju. Trishala once said, "My attitude and temper is like my dad. My kindness, gentleness and loving side is from my mom. My giving side and style is from both my parents."

Sanjay Dutt's heartfelt birthday note to Mahesh Bhatt: You are a living inspiration for everyone who knows you 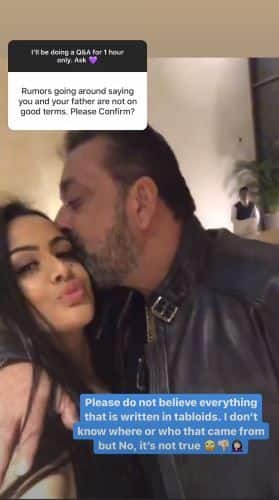 Also Read - From having his first cigarette at the age of 9 to carrying 1 kg of heroin to a shoot: Here are some rare facts about Sanjay Dutt that'll leave your jaw dropped

In her Insta chat, she also revealed that she works as a psychotherapist and would like to work in the mental health sector in India if given a chance. She said she had no plans of entering Bollywood. Trishala revealed that her fave villian is Mystique from X-Men and it is a part she would like to play.

Fans of the father and daughter can relax now. Trishala is doing great work in her sphere and we would like to see her in India soon. Stay tuned to BL for more scoops and updates!