Tubelight has a beautiful message of having faith and believing in the good. Salman Khan's sincere and heartfelt performance in the film will definitely move you.... 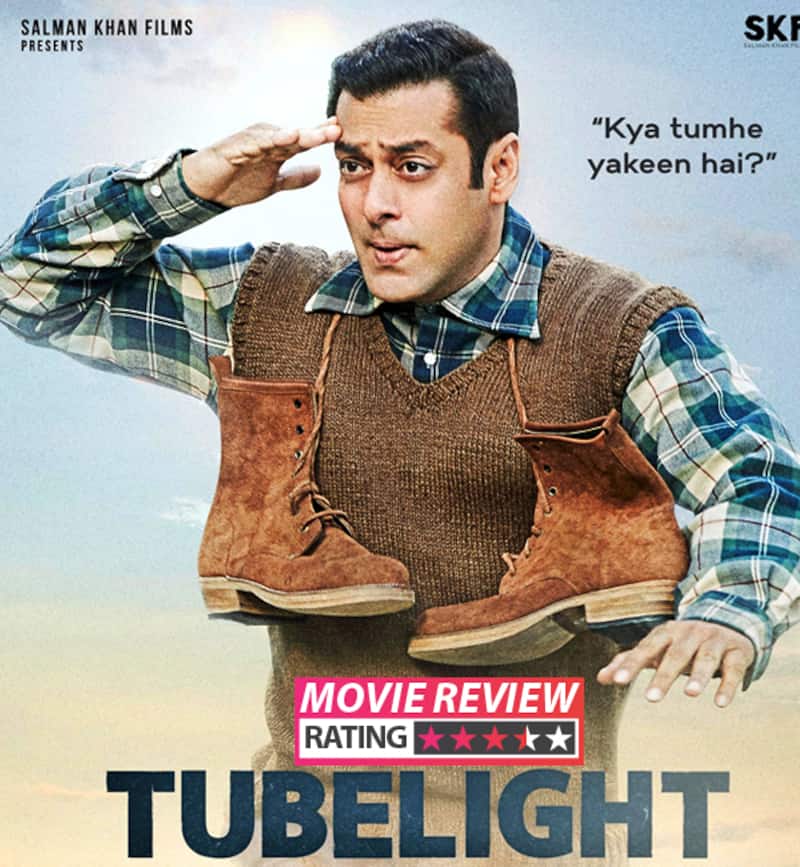 Faith can move mountains. If you believe it then you achieve it. Seek and you shall find! Well, these aren't lines from Rhonda Byrne's self-help best seller The Secret, but lines from Kabir Khan's latest film Tubelight. Starring Salman Khan in the lead, Tubelight is a moving human drama set against the background of 1962 Indo-China war. Apart from Salman Khan, the movie also stars Chinese actress Zhu Zhu, Sohail Khan, late Om Puri, Mohammed Zeeshan Ayyub and Shah Rukh Khan in a cameo. Here's our review of the movie... Also Read - Tuesday Trivia: Did you know Aamir Khan rejected Shah Rukh Khan's DDLJ, Salman Khan's Bajrangi Bhaijaan and more blockbusters?

Set against the backdrop of the 1962 Indo-China war, Tubelight is the story of two brothers separated by fate only to be later reconciled by the power of belief. Sounds too much to comprehend? Well, fret not, when you have Salman Khan selling the idea of faith and belief, the buyers are unlimited. Tubelight also stars Chinese actress Zhu Zhu and child actor Martin leaves an impact, despite their lack of screentime. These two actors play an important role in moving the snail-paced plot at a steady pace. Supporting actors like the late Om Puri and Zeeshan Ayub have strong lines and characters arcs. So how much of faith does one need to have to sit through Tubelight? I don't know about faith, but patience should be your best friend if you want to enjoy the film. And if you have that, Tubelight can be an emotional experience for you, especially if you are a Salman Khan fan. Also Read - Raksha Bandhan 2022: Bollywood stars who are more successful than their brothers and sisters

So much will be talked about how good Salman is in playing the role of Laxman who's a cross between Tom Hanks in Forrest Gump and Hrithik Roshan in Koi Mil Gaya. One thing that comes to my mind is the fact that Tubelight is Salman's biggest risk, irrespective of the outcome of the film, the actor deserves an applause just for picking up this subject and a role that is an antithesis of his image (Salman being a buffoon, slapped multiple times and humiliated). His performance in Tubelight is extremely personal, he has totally let go of the larger than life image and got under the skin of this vulnerable man-child who wants to believe in the good. His scenes with Sohail are extremely heart warming and Kabir has gone all out to milk their natural camaraderie to the maximum. The first half has a feel good tempo and sets the pace as to what to expect. Also Matin and Zhu Zhu's entry into the film raises the somewhat mellow tone and making it more exciting. Salman has proved how much at ease he is when it comes to performing with kids. We saw it in Bajrangi Bhaijaan and we see it again in Tubelight. Kabir creates some fantastic moments between Salman and Matin and you wish those scenes didn't end so soon. The tears are real, the ones you see in Salman's eyes. His breakdown moment on realising his brother's fate or even the epic cameo scene with Shah Rukh show how far he's come and evolved as an actor. That makes me mention that SRK's cameo in the film seemed an attempt to glorify him rather than create a solid standout scene in the film. Camera work is superb and extra efforts have been taken to make sure the period looks believable. Alvira and Ashley have created the right simpleton look for Salman while Leepakshi seems to have done the correct research to create the overall look and feel of the 1960s.

Over expectation is a buzz kill and that's what Tubelight teaches you. Maybe I expected the film to be an epic journey of a brother in search of his lost partner, maybe I wanted Kabir Khan to revisit his Kabul Express days and give that realistic cinema another chance. Maybe I was greedy for some unplugged moments between Salman and Matin, or maybe I just wanted a better film! Tubelight isn't a bad film, it has a lot of things going for it, but it is heavily weighed down by the weight of the superstar plastered across its poster. In an effort to make Salman emote and make us cry, Kabir has lost track of the story arc. The second half especially has so many random songs that pop out of nowhere that you keep checking your watch. The 'yakeen hai' (keep the faith) line gets too preachy and monotonous towards the end and the constant references to Gandhi could have been trimmed. Tubelight is neither a war film, nor a family drama between two brothers. It struggles to find its own identity and by the time you manage to give it one, the end credits are rolling on the screen. Music was a major letdown for me with just the Radio song being somewhat hummable.

Tubelight has a message that resonates with current times - keep the faith and believe in the good. Salman's sincere and heartfelt performance in the film will definitely move you. Keep that box of tissues handy!