Tusshar Kapoor and son Laksshya make for an adorable dad-son duo as they're clicked in Bandra - view HQ pics!

Actor Tusshar Kapoor is enjoying the role of being a dad to the fullest. His adorable munchkin Laksshya is yet to turn two years but is quite a sports lover. Today, dad and son were clicked outside a football ground in Bandra. We know that Laksshya is already quite a fan of the sport. It seems the little fellow would eagerly watch older kids play and often run after the ball. This prompted Tusshar to enrol him for football sessions. The father told a paper, "It’s a joy watching him get the hang of it a such a young age. It’s good to see him take interest in sports." The father makes sure he spends three hours daily with his son and they play soccer together. Laksshya looks adorable in the yellow T-shirt as he is nestled in his dad's arms.

Can you identify Hrithik Roshan, Tusshar Kapoor, Twinkle Khanna and Ekta Kapoor in this picture with Reena Roy?

Also Read - From Uday Chopra to Twinkle Khanna: Star kids who are the Richie Rich's of Bollywood despite being flop 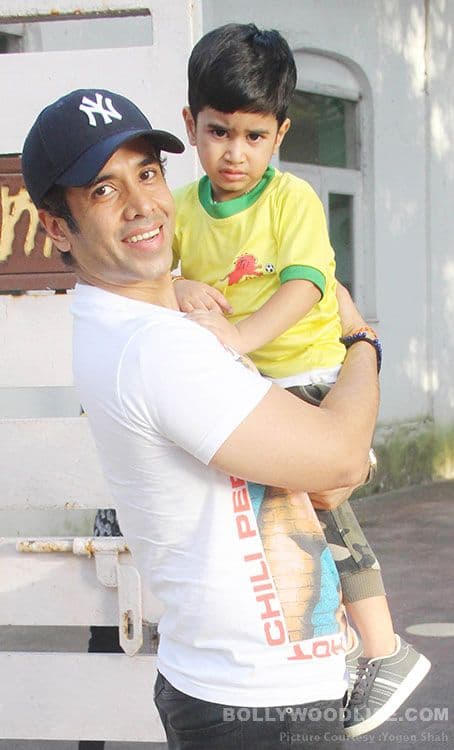 The actor has spoken about how his life revolves around his son now. He told IANS, "I am 41 now. At around 35, 37, I started getting paternal instincts for my pets. I also began to wonder then how would it feel like to hold your child? I wanted to be a father and I wanted to start a family, so I did it. People then messaged me that I am inspiring them." The actor says he is a hands-on parent and does not want to miss out on any moments of their childhood. Stay tuned to BL for more updates!