Indian Idol 12: Will Mohd Danish or Nihal Tauro get eliminated in the coming week? Here's what we know

The most popular and loved singing reality show, Indian Idol 12 will soon get its winner as the finale episode will air on August 15.

The most popular and loved singing reality show, Indian Idol 12 will soon get its winner. The finale episode will air on August 15 and viewers will finally get their winner. Post elimination of Ashish Kulkarni, now the show has Pawandeep Rajan, Arunita Kanjilal, Shanmukhapriya, Mohd Danish, Sayli Kamble and Nihal Tauro in the top 6 list. The contestants are leaving no stones unturned in giving their best to reach the top 5. Also Read - Indian Idol 12: From Reena Roy comparing Nihal Tauro and Pawandeep Rajan to Kamal Haasan and Mehdi Haasan to calling Jeetendra more punctual than Amitabh Bachchan – here are show’s top 5 moments

Recently, fans feel that Arunita Kanjilal, Shanmukhapriya, and Sayli Kamble will be in the top 3 list. Pawandeep, Mohd Danish, and Nihal Tauro did not make it to the list. Does this mean that they will get eliminated this week? Also Read - TRP Report Week 28: Shaheer Sheikh-Erica Fernandes' Kuch Rang Pyaar Ke Aise Bhi 3 fails to impress, Indian Idol 12 sees a jump in the ratings 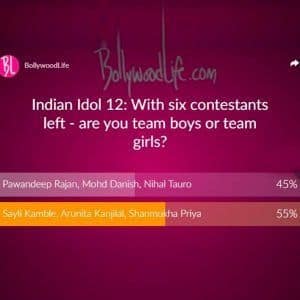 Well, we had asked the fans who they think will be in the top 3. With six contestants left, are you team boys or team girls? Well, the verdict is out and 45% have voted for Pawandeep Rajan, Danish, and Nihal Tauro, while 55% have voted for Sayli Kamble, Arunita Kanjilal, Shanmukhapriya.

The Indian Idol 12 host told a leading daily that he will quit hosting after 2022 as he will be moving on to bigger things. He told The Times Of India, "I have such beautiful associations and relations in the industry that agar main abhi chhod doonga toh it will be like abandoning the ship midway. I am laying the foundation for my way out." He said, "But my time as a host is coming to an end. After all these years of hosting, main apne pairon par khada hoon, par pairon par khade ho kar abhi pair mein thodi problem hone lagi hai. Ab seat par baithne ka time aa gaya hai (laughs!)."

The show is judged by Anu Malik, Sonu Kakkar, and Himesh Reshammiya.