Actress Neha Dhupia recently revealed that she got pregnant with her second child with Angad Bedi when the actor had contracted COVID-19.

Actress Neha Dhupia recently revealed that she got pregnant with her second child with Angad Bedi when the actor had contracted COVID-19. The head over heels in love couple recently announced that they are expecting their second child in the most adorable way. Also Read - Angad Bedi shares WORRYING news about Neha Dhupia's second pregnancy; reveals it's 'not easy on her, baby wasn't planned' – deets inside

In an interview with Hindustan Times, Neha spoke about her initial days of pregnancy as she said, “Hard is an understatement. It was a lot that we went through. It’s always hard when someone around you gets Covid-19, and harder when you’re pregnant, but Angad was the one who helped me stay positive in that period.” Also Read - Neha Dhupia and Angad Bedi expecting their second child; make the announcement with an adorable picture

The 40-year-old actress confessed that there are a lot of things that she wants to do differently when she becomes a mother for the second time. The mommy to be said that this time she has got fewer questions in her mind as she knows the beats of it. She was quoted saying, “The second pregnancy has been different. I’ve got less questions in my mind because I know the beats of it, and why and how the mind and body react to it. I always compare it with my first pregnancy. However, the lockdown didn’t make it easier.” Also Read - Inside Edge 3: Maker Karan Anshuman slams reports of season 3 being scrapped; says, 'Absolutely untrue malicious'

Neha who is due in October said that she has been staying indoors and spending quality time with her daughter Mehr. 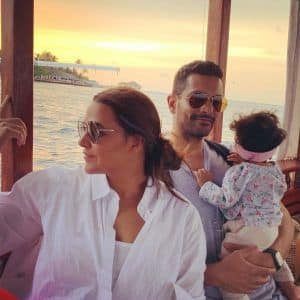 She further added saying that overwhelms her is the world they are living in. She said that she feels there is a lot of uncertainty that goes into your head and she often thinks if they are bringing their child into a safe zone or not.

Neha even revealed that Angad was quite excited after knowing that they are going to be parents for the second time. “It was full of excitement and joy. It’s between amazed, amused and happy. We looked at each other [and realised] that this is what we wanted and we got.”

Neha and Angad tied the knot in May 2018 and became parents to Mehr on November 18 in the same year.