Yes, It's Valentine's Day and of course, it is D-day for Ranveer Singh's Gully Boy too but here's another announcement about Twinkle Khanna that you might not know! I know what you're thinking but the fact that she is witty and hilarious has already hit the headlines. Instead, the news is that Mrs Funnybones has lived up to her reputation and has come up with her own wacky rendition of Apna Time Aayega and it's bonkers! While we are not surprised, her quirks have outshined all her past shenanigans. Also Read - Valentine's Day 2019: From Sonam Kapoor to Rajkummar Rao here's how B-town celebs are celebrating love - view pics

No, it was no private preview. In fact, Akshay Khanna just took to Instagram to share it with the entire world in an adorable Valentine's day post for his dearest Tina! While sharing the video he wrote (and pay attention to the hashtags) "When she’s not educating me with new words to add to my vocabulary...my 24x7 entertainment ❤️ #HappyValentinesDay #PakaoingSince2001 ?#GullyGirl" Check it out here! Also Read - Karan Johar is DONE chasing love and his V-day message will make all singles go ‘Apna Time Aayega’

When she’s not educating me with new words to add to my vocabulary...my 24x7 entertainment ❤️ #HappyValentinesDay #PakaoingSince2001 ? #GullyGirl

Needless to say, we ROFL'ing and so is Ranveer Singh who took to drop a lot of emojis in the comments section and replied saying "I'm dead." Same, Ranveer. Same! Also Read - Valentine's Day 2019: Sara Ali Khan, Kartik Aaryan, Sushant Singh Rajput's Tinder bios could read like this 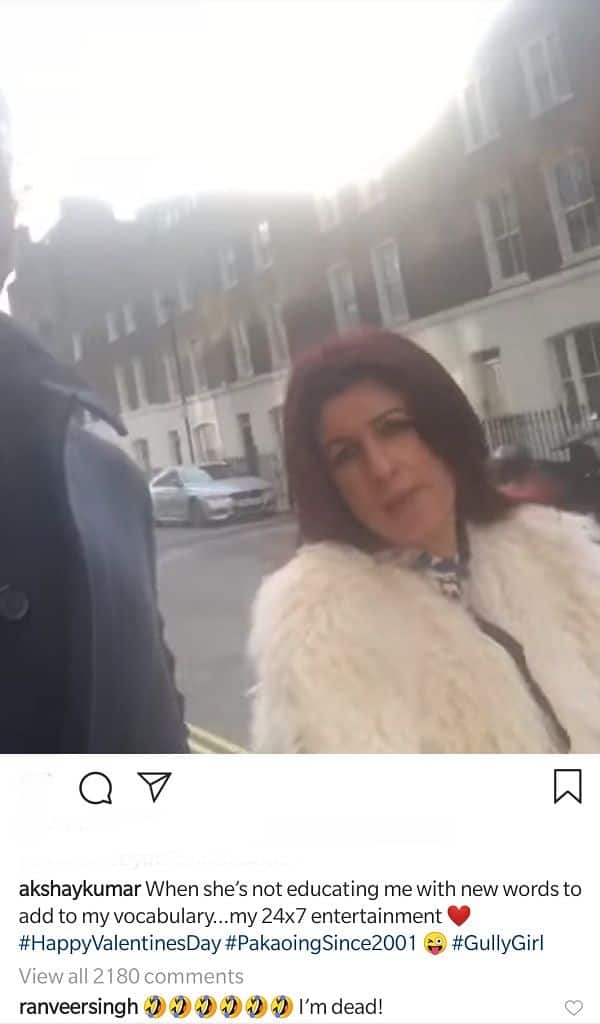 If you haven't followed the trail, Akshay's post is a comeback of sorts for Twinkle's post earlier where she expressed of woes and served sass when Akki called her 'Maha Pakau'.

When she’s not educating me with new words to add to my vocabulary...my 24x7 entertainment ❤️ #HappyValentinesDay #PakaoingSince2001 ? #GullyGirl

So, now you know! Also Twinkle, how you so awesome?