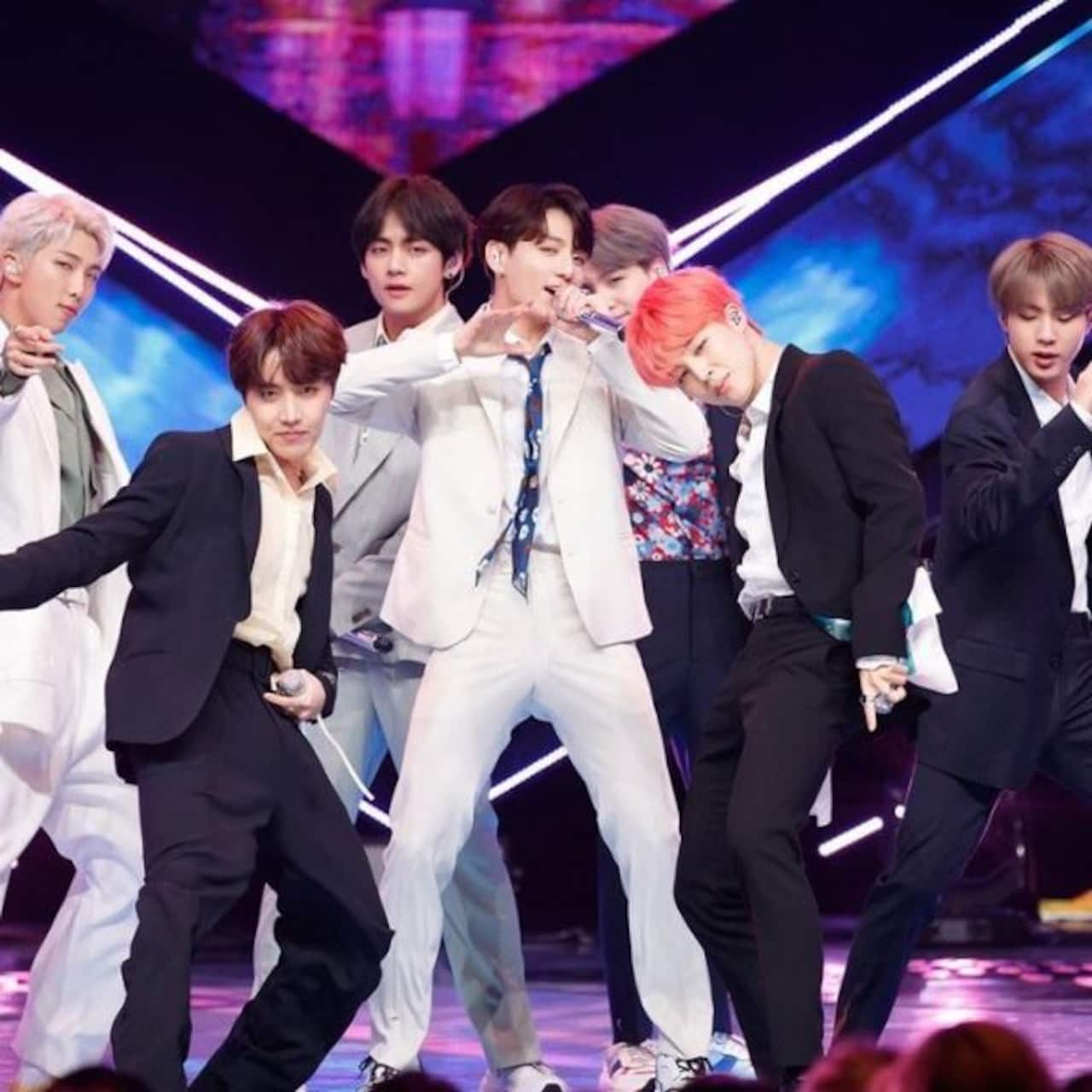 In a very short period of time, the South Korean pop group, BTS has garnered an immense fan following across the globe. On Saturday, the group comprised of 7 talented performers, achieved one more milestone as they become the first South Korean band to show their skills at the iconic venue of Wembley Stadium, England. Reportedly, all tickets of the concert was sold out in just 90 minutes. The group, who has been on the tour around the world as the part of LOVE YOURSELF: SPEAK YOURSELF tour played the set of 24 songs and brought down the house. Also Read - BTS: Kim Taehyung aka V shows off his plating skills like a pro in 'Seo Jin's' cooking show; promo makes ARMY super excited [Watch Video]

Band members Jin, Suga, J-Hope, RM, Jimin, V and Jungkook started the show with Dionysus track, which enthralled the audience. RM told the crowd while performing, "You guys always had the greatest artists, historically, in the music industry - The Beatles, Coldplay, Ed Sheeran, Adele. We don't even have to make a list. So the UK was like the big, big wall to me. But tonight we, and you guys, just broke the wall." Also Read - BTS: An ARMY visits Golconda Fort and finds Jimin and BTS fanchant written on the wall; pics go viral

As expected, social media users cheer and express their happiness over this mind-boggling performance on Twitter and we have shortlisted some of them for you... Also Read - Has Pathaan impacted the release of BTS Yet To Come In Cinemas In India? Worried desi ARMY wonders what happened to February 1 screening [Read Tweets]

bts have really taken over the world... i already knew but watching them live at wembley stadium tonight really reiterated that!! they deserve all the success after all the blood, sweat and tears god i’m so inspired ??? pic.twitter.com/mIwevIrVD8

I witnessed today at Wembley a life changing experience- a saw you for first time live on your full force. Man, you are freacking stunning and a whole stage king. It was even deadlier in reality then how the whole Army fam always complain about going out from concert hoseoked?‍♀️?‍♀️

I’ll never forget today.
Tonight, I’m the happiest man in the world. It’s all thanks to you, ARMY.
London! Wembley!
LOVE U! ??? pic.twitter.com/wFlW3hXGRi

More than 140,000 viewers from around the world tuned in to watch BTS’s historic Wembley Stadium concert on V Live in the early hours, helping the group leave yet another mark in Korea's music history. pic.twitter.com/Od6YvD3D24

From yesterday my twitter tl is full of emotional post about TaeTae's debut videos or wembley D2 emotional moments..
I can't take this anymore.. please..
Already I am homesick and holding myself somehow..?
I couldn't gather courage to see JK's live even..
??@BTS_twt

From yesterday my twitter tl is full of emotional post about TaeTae's debut videos or wembley D2 emotional moments..
I can't take this anymore.. please..
Already I am homesick and holding myself somehow..?
I couldn't gather courage to see JK's live even..
??@BTS_twt

My first video I'd like to share from the @BTS_twt concert at Wembley is the magnificent Hoseok. He is incredible. J Hope J Hope J Hope. The crowd went wild!! Loved it so much. Awesome. #BTSxWembley #BTSatWembley pic.twitter.com/Npkr6cX4Xt

All beautiful talented 7 mens and beautiful talented army..you all rocked WEMBLEY...??? And yes the spcl guests like us who watched it live from all over the world...????we all lived together these 2 days..? thank you all for your efforts and enthusiasm ??we love you? pic.twitter.com/XWB3Me9ANq

In July, BTS will be having 4 shows in Japan, which will start from July 6 in Osaka. Anyway, what are your thoughts on the maiden Wembley concert of BTS? Tweet to us @bollywood_life