Vivek tweeted congratulating Modi on his second term as the Prime Minister of India and included the hashtag which he realised later and deleted the tweet.

After the chaos over his recent tweet ahead of the elections, Vivek Oberoi has found himself in another weird situation because of his recent tweet. Ahead of Narendra Modi's swearing-in ceremony, Vivek Oberoi tweeted about the ceremony and used the hashtag #Bharat which had an emoji on Twitter for Salman Khan's upcoming film with the same title. Vivek tweeted congratulating Modi on his second term as the Prime Minister of India and included the hashtag which he realised later and deleted the tweet. Users on the digital platform were quick enough to notice this and highlighted the tag which forced the PM Narendra Modi actor to delete and tweet again without the hashtag #Bharat this time. Also Read - Trending Entertainment News Today: Fans want Padma Vibhushan for Sonu Sood, Ajay Devgn's noble gesture, Aishwarya Rai reveals why she refused Kuch Kuch Hota Hai 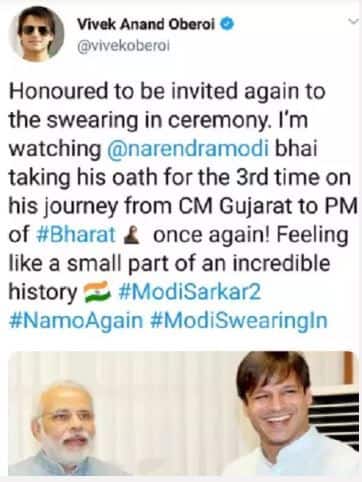 Vivek Oberoi recently found himself amidst a controversy after he shared a creative meme which depicted the exit polls of the recently held Lok Sabha elections. The meme had his ex-flame Aishwarya Rai, Salman Khan and Abhishek Bachchan and drew ire of digital users and celebrities from Bollywood. Vivek apologized for tweeting about it and said that just an act of sharing a meme, which he found hilarious, could draw so much attention. Also Read - Rekha, Aishwarya Rai, Smriti Irani – 7 actors who dropped out of movies before Kartik Aaryan for contentious reasons

Honoured to be invited again to the swearing in ceremony. I’m watching @narendramodi bhai taking his oath for the 3rd time on his journey from CM Gujarat to PM of Bharat once again! Feeling like a small part of an incredible history ?? #ModiSarkar2 #NamoAgain #ModiSwearingIn pic.twitter.com/jzk1jV6lVn

Vivek Oberoi was seen playing Narendra Modi in the biopic on the Prime Minister which released recently. Directed by Omung Kumar, the film received a decent response from audience and is faring well at the box office. Despite mixed reviews from critics, the biopic continues to hold string grip at the box office and fare well.