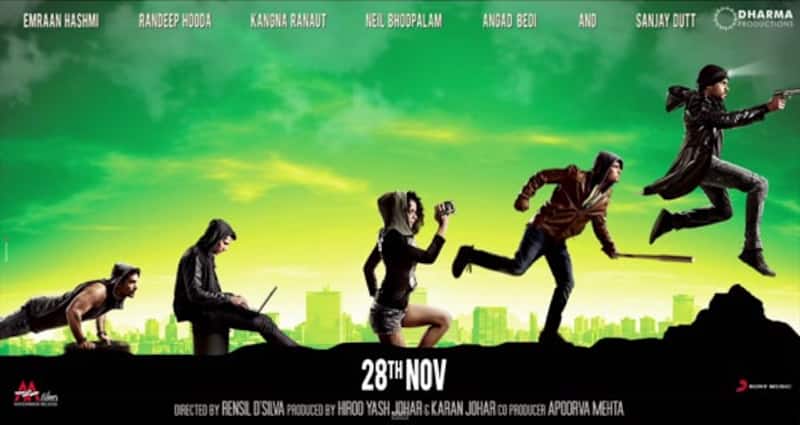 The much delayed Emraan-KJo association will finally be out this November...

Karan Johar has finally come up with the first look of his upcoming Rensil D'Silva film Ungli. The film has been delayed since long now, but the makers promise that on November 28 the film will finally see its light of the day. Starring Emraan Hashmi, Randeep Hooda, Sanjay Dutt, Kangana Ranaut, Neil Bhoopalam and Angad Bedi, the film's first motion poster seems to be high on action. Here's why the poster piqued our interest... Also Read - After Laal Singh Chaddha-Raksha Bandhan's disastrous box office run; these five upcoming BIG clashes may end up losing money

-It's the first time we're seeing the association of KJo with class actors like Emraan and Randeep. Also Read - Bipasha Babu, Sonam Kapoor and more: Check out the most glamorous pregnancy announcements of Bollywood divas [VIEW PICS]

-Sanjay Dutt has been out of the film circuit for long and this will be a sort of comeback for the ace actor. Post this he will also be seen in Aamir Khan and Rajkumar Hirani's P.K. Also Read - Liger: Vijay Deverakonda predicts if his and Ananya Panday's film will work with the Hindi audience

-Kangana has been on a high this year with her films (Queen, Revolver Rani) doing well. It will be great to see her first association with KJo.

-Emraan and Kangana are also coming back together after a long time (Once Upon A Time In Mumbai). Will be great to see their chemistry sizzle onscreen.

-Emraan and Randeep have also worked in many projects together .(Once Upon A Time In Mumbai, Jannat 2, ) It will be great to see if this movie also repeats the success of their past ventures.

-Neil Bhoopalam will be back after Shaitan. His TV outing in Anil Kapoor's 24 garnered him huge fame. Post this he will also be seen in Anushka Sharma's NH 10.

Wethinks, all of these facts make the movie a must watch. The theme of the film seems to be robbery. From the motion poster it appears that all of the star cast are set to devise some devious plan to rob someone or something. We are dying for the trailer of the film to be out. So go ahead BollywoodLifers, take a look at the poster and let us know what are your thoughts on the motion poster.