Urfi Javed dons a dress made of safety pins over a black lingerie set; a far risquer version than outfits worn by Elizabeth Hurley or Jennifer Lopez

Urfi Javed dons a dress made of safety pins over a black lingerie set; it is far more revealing one that what was worn by Jennifer Lopez or Elizabeth Hurley 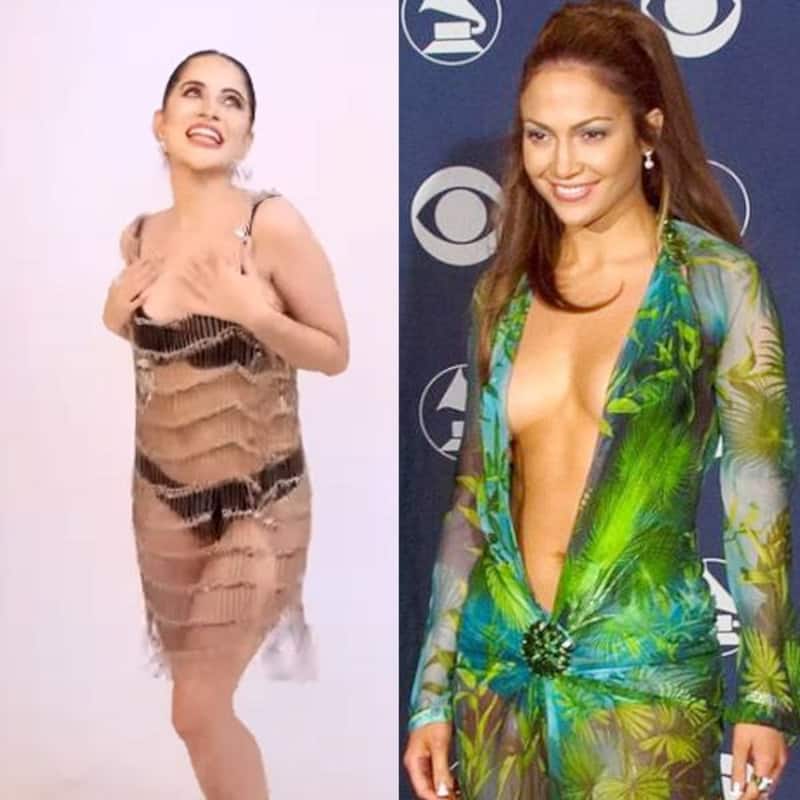 Urfi Javed is known for her crazy fashion. While we might not like the aesthetics of what she wears, there is no denying that she is getting a lot of attention. The lady who was a part of Bigg Boss OTT has attained celeb status after the online show only by the sheer dint of her risque outrageous dressing. Urfi Javed also likes to design her clothes in different ways. We saw her make a metallic foil dress like what Rihanna once wore to the Met Gala. The latest dress is one made of safety pins. She has worn it over a black lingerie set. The whole dress is like a mesh armour. Also Read - Rakhi Sawant brutally TROLLED for claiming BF Adil is planning to buy 10 flats in Dubai as they're cheaper; netizens say, 'My whole life's a lie'

The safety pin dress became famous when Jennifer Lopez wore a dress held only by a pin at the waist at the Grammys in 2000. The dress went viral at a time when there was no social media. In fact, Versace also brought back the design a year back. Jennifer Lopez will be associated with that dress forever. The dress was made of chiffon in a green tropical print. Also Read - Vijay Deverakonda, Aamir Khan, Sunny Leone and more: Bollywood stars who bared it all and posed nude for film posters [VIEW PICS]

British actress Elizabeth Hurley whom most desis know for her affair with Hugh Grant and marriage with Arun Nayar also wore such a dress once. It was for the red carpet of the 1994 movie Four Weddings And A Funeral. She wore it in London with her beau Hugh Grant by her side. Urfi Javed has been quite candid about how her risque dressing and life choices has alienated her from many in her life. The Lucknow based girl left home years back for a career in showbiz. She spoke about how the constant struggle to get a break in the industry left her traumatized and almost suicidal. This look is going to make hell of a lot of noise. Also Read - Liger: Vijay Deverakonda's nude poster hits a milestone on Instagram; excited fans declare him 'Hottest man alive' [VIEW TWEETS]