Varun Dhawan and John Abraham teach us how to walk into work in this smokin HOT Dishoom poster!

We present to you the first poster of Varun Dhawan, John Abraham and Jacqueline Fernandez's Dishoom and we have to say the makers have stunned us again...

The actors stun us once again...

We revealed to you the logo of Varun Dhawan, John Abraham and Jacqueline Fernandez's Dishoom last week and we thought it was inspired somewhat by the Dhoom franchise. Now, we give you the first poster of the film and we have to say the makers have stunned us again!

The new poster features only John and Varun, however Jacqueline has gone missing. The makers may be planning to keep Jacqueline's look a secret, who plays a Kleptomaniac (yes, we revealed this to you EXCLUSIVELY). Coming back to the poster, John and Varun flaunt their machoness as they walk down the streets of Abu Dhabi. And it seems that the actors will be playing cops as Varun flaunts a batch on his waist. John puffs on a smoke, while a bulldog is walking alongside his co-star. Their stern expression and the sexy car behind them, makes the still even more intriguing. The poster is fabulous and with the trailer releasing this June 1, we are super excited!

The film, directed by Varun's brother Rohit Dhawan, has been shot across Morocco and Abu Dhabi and we can't wait to see the awesome action sequences that they have shot. Dishoom releases on July 29. Check out the poster right here and tell us what you think about it in the comments section below! 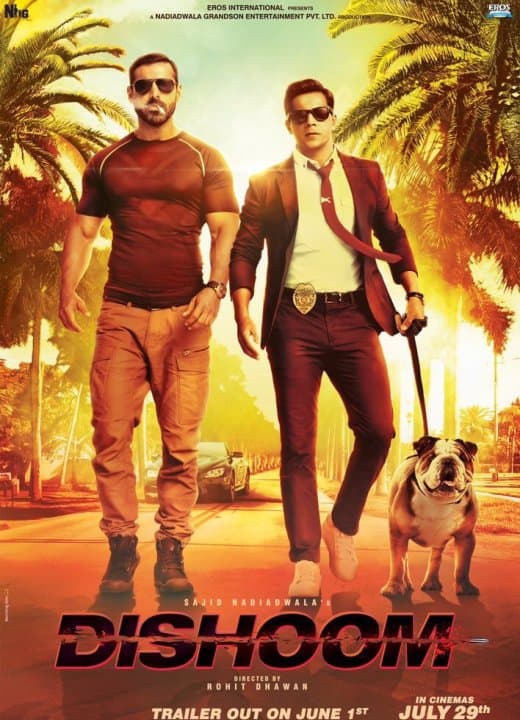 Also see what Jacqueline, Varun and John had to say about the film at the wrap up press conference in the video right here: