Varun Dhawan to attend Justin Bieber's Purpose Tour on May 10?

Music lovers in India are psyched at the fact that Justin Beiber will be performing live here on May 10 for the first time. It definitely is a big news for Beliebers - that's what Bieber fans are called. Anyway, so people have gone crazy and we heard Bollywood stars would be part of the event as well. Remember Coldplay? Yup, something similar is gonna happen in May. While we have only heard rumours about who could be there, here comes a confirmation right from the horse's mouth! Varun Dhawan confirmed on his Twitter chat that he will attend Purpose Tour event on May 10.

This video proves Varun Dhawan and Alia Bhatt in Badrinath Ki Dulhania are the cutest pair ever!

Varun had a chat session on Twitter with his fans where he revealed about it. Somebody asked him if he will be part of Purpose Tour on May 10 and he replied with an Yes. That's not all. He even said that he wants to watch 'him' live as well. Him definitely means Justin Bieber! If you don't believe us, check it out right here. Also Read - Holi 2021: Rang Barse, Lahu Munh Lag Gaya and more Bollywood songs for your perfect festive playlist 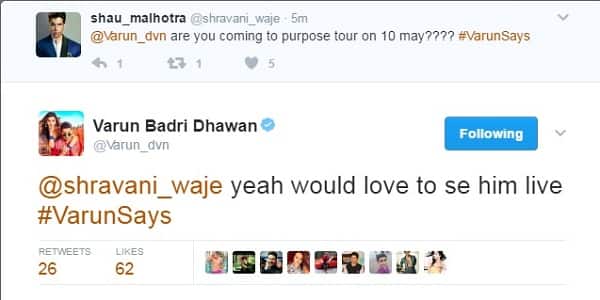 Reports also suggested that Bollywood celebs are being approached to warm up the audience before Justin kickstarts his show. A source told the leading entertainment daily, “Nothing has been confirmed yet, but AR Rahman, Sonu Nigam and Arijit Singh along with a host of Bollywood biggies such as Shah Rukh Khan, Ranveer Singh, Deepika Padukone, are most likely to be roped in to perform and host the concert. The opening acts will also feature a few international artistes, since it will be a day-long affair.” And it seems Varun has already made up his mind to be there. The tickets to the concert will be out on February 22.

Damn, summer is surely a long wait for now!