Varun Dhawan vs Nawazuddin Siddiqui or Shikhar Dhawan vs South Africa, whose 'Badla' did you like more? Vote!

Its Dhawan vs Dhawan. Whose 'Badla' did you find more happening? Make your vote count!

Today is a big day. India is playing its second match in the ongoing ICC World Cup 2015 and boy are we nailing it! After having defeated Pakistan in the last match, our men in blue truly are giving South Africa something to cry about. We ended the first half with a deadly score of 307 for 7, the man of the hour is none other than Shikhar Dhawan. The ace batsman not only scored a century but went on to beat that ball till 137. Also Read - Radhika Apte on her nude clip leak: Couldn’t step out of the house for days because my driver, watchman and others recognised me from the video

This Dhawan has made India proud indeed. But there is another one in Bollywood, who people can't stop raving about. Varun Dhawan has created quite stir with his powerful performance in his recently released film Badlapur. Nit only is B-town on a congratulatory spree for this newbie, but the film has made people flog to theatres on a massive scale. We recently came across a kickass picture where Varun and Shikhar are being pitted against each other for the respective 'Badlas' they have taken! Also Read - Priyanka Chopra, Deepika Padukone, Disha Patani: 15 Bollywood actresses who played mothers at a very young age – view pics 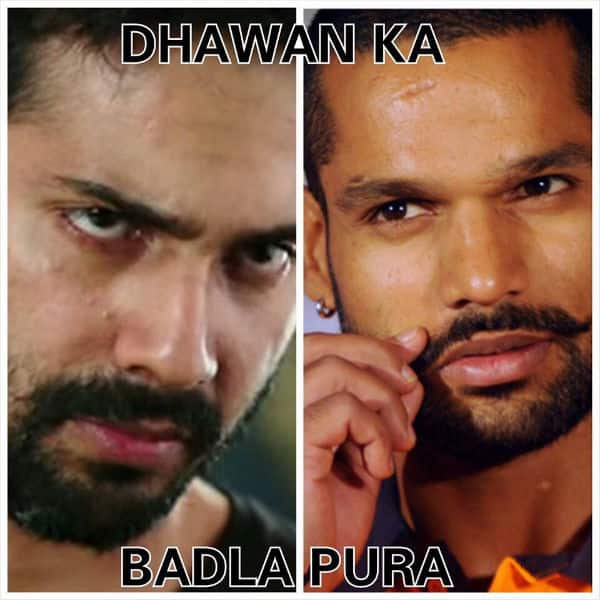 Difficult to choose from options like these! But its time for you to make things simpler for us. Whose Badla did you like more, Varun Dhawan's against Nawazuddin Siddique or Shikhar Dhawan's against South Africa? Vote in the box below!