Verdict Out! Fans like Tiger Shroff-Tara Sutaria more over Aditya Seal-Ananya Panday in The Jawaani Song from SOTY2

Fans love Tara Sutaria and Tiger Shroff's chemistry more than Ananya Panday and Aditya Seal in the Jawani Song from Student of The Year 2. Watch video

The Jawaani Song was the first number from Student of the Year 2 that was released. And people are loving and appreciating it. Even Randhir Kapoor who featured in the original with Jaya Bachchan has given his nod to the song saying that not everyone knew about the original track, and thanks to the remix people are actually going back and searching for the original song. Music composer duo, Vishal and Shekhar have done a fab job at recreating the original RD Burman number. The song depicts a kind of face-off between couples, which is a part of the dance competition in the film. The energy, the choreography has our hearts. Not just the that, but the jodis! Tiger Shroff, Tara Sutaria, Aditya Seal and Ananya Panday are burning the dance floor with their high energy performance. The distinct competitiveness along with sizzling chemistry hangs in the air and we have a winner. Also Read - Shraddha Kapoor, Vicky Kaushal, Parineeti Chopra keep it chic and comfy as they take a jetty ride to work — watch video 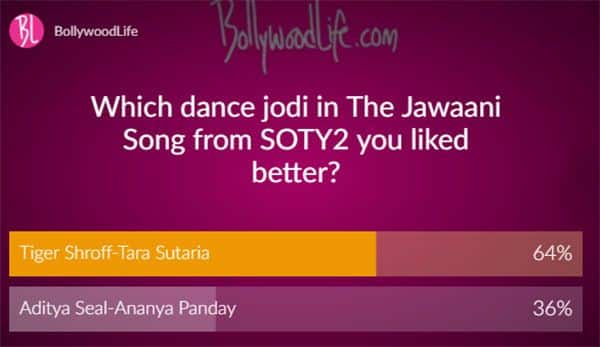 With 64 per cent votes, fans have made Tiger Shroff and Tara Sutaria the winner of this poll. Aditya Seal and Ananya Panday secured 36 per cent votes which is not bad at all. While the movie will release on May 10, it seems like people have already picked their side by rooting for Tara Sutaria and Tiger Shroff. In the film, Tara portrays the character of Mia who is a dance enthusiast and wants to make a career out of her passion. Tiger Shroff and Ananya Panday have their super amazing solo segments in the song which had us hooked to it. Let’s watch it again, shall we? Also Read - Indoo Ki Jawani: Kiara Advani, Aditya Seal, Mallika Dua REACT to the 'Love Jihad' controversy around the film [Exclusive]

Helmed by Punit Malhotra, Student Of The Year 2 is set to hit the screens this Friday. Both the leads actresses Ananya Panday and Tara Sutaria will make their silver screen debut with this film. While Ananya is a newbie, Tara has previously worked in Disney sitcoms like The Suite Life of Karan & Kabir and Oye Jassie. Tiger Shroff and Aditya Seal will be pitted against each other. Apart from these, the film also stars Samir Soni, Abhishek Bajaj, Manoj Pahwa, Farida Jalal, and Harsh Beniwal. Alia Bhatt and Will Smith have special appearances with songs in the films.