Vicky Kaushal – Katrina Kaif wedding: Bharti Singh REVEALS if she is attending the GRAND shaadi or not

Katrina Kaif and Vicky Kaushal are all set to get married on 9th December 2021. While a few Bollywood celebs have already reached the venue, it is not yet known which other celebs will be attending the wedding. Recently, Bharti Singh on her Instagram revealed if she is attending Vicky and Katrina's marriage or not.

Vicky Kaushal and Katrina Kaif are getting married at Six Senses Resort in Sawai Madhopur, Rajasthan. The D-Day is on the 9th of December, and from today, the pre-wedding ceremonies start. Last night Katrina, Vicky, and their families reached the venue and they were welcomed in a grand way. Today, celebrities like Kabir Khan and his family, Sunny Kaushal’s alleged girlfriend Sharvari Wagh, Neha Dhupia and her husband Angad Bedi, filmmaker Vijay Krishna Acharya, and singer Gurdas Maan have reached the venue of the wedding. Well, it is not yet known which other celebrities will be attending the wedding, but recently, comedian Bharti Singh revealed that she is not going to Vicky and Katrina’s marriage. Also Read - R Madhavn feels he can't star opposite Katrina Kaif; Hrithik Roshan is the reason behind it

Bharti was in Dubai for a vacation with her husband Haarsh Limbachiyaa. The comedian took to her Insta story to share a video from the plane in which she showed that Haarsh is sleeping. It looks like soon her fans started speculating that she is attending the wedding. So, Bharti shared one more story in which she clarified, “Guys hum Vicky Katrina ki shaadi maie nahi, dubai se aapne ghar jaa rhe hai (Guys we are not going to Vicky and Katrina’s wedding, we are going to our house from Dubai). Also Read - Katrina Kaif posts a Sunday selfie from Indore; netizens say '3rd picture mein zarur tum Vicky Kaushal ki taraf dekh rahi ho' – view pics 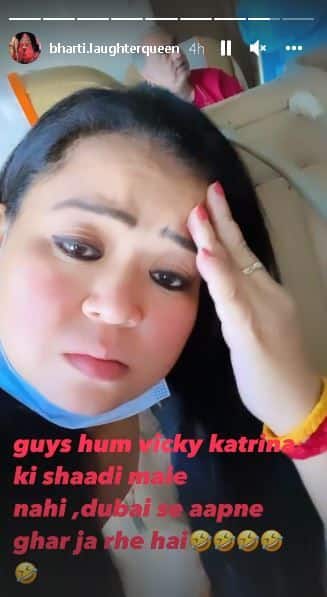 Well, reportedly, Shah Rukh Khan, Alia Bhatt, Deepika Padukone, and others are expected to attend the wedding. However, till now, these celebs have not been spotted at the Mumbai airport or the Jaipur airport.

Katrina’s very good friend Salman Khan won’t be attending the wedding. However, he has a special gift for the couple. The superstar has organised his bodyguard Shera’s security agency, Tiger Security, for the wedding.

Today, Katrina and Vicky’s sangeet function is going to take place. We have learned that the bride-to-be will be dancing on her songs like Sau Aasman, Nachde Ne Saare, and others, while the groom-to-be will be performing on his favourite Punjabi tracks.