[View pic] Did Vicky Kaushal just confirm his relationship with Harleen Sethi with this Broken post?

Vicky Kaushal and Harleen Sethi met through a common friend.

Rumours are abound that Vicky Kaushal is not single anymore. He is taken and the lucky girl is Television actress and hostess Harleen Sethi. Of course, none of them came out in the open about the relationship but then 'tum laakh chupao pyaar magar duniya ko pata chal jayega.' Pardon our extreme love for the '90s which has a song for every situation spill over here. Moving on, recently the trailer of Harleen's webseries with Vikrant Massey, Broken, was released and it is getting interesting response from people. Now to show his support for his woman, Vicky posted an Insta story calling Vikrant and Harleen his 'do anmol ratan.' This is perhaps for the first time that Vicky has done anything of the sort. This may not be a confirmation but it definitely means there is some kind of bonding between the two.

A few days ago, Vicky and Harleen were caught coming out of a restaurant. While the actor obliged the paparazzi, Harleen made a dash for the car. A source had told an entertainment portal that the two of them met thanks to their common friend Anand Tiwari. They hit it off instantly but are keen to keep things slow. Well, that really is a good decision. There is no hurry anyway. Also Read - Broken But Beautiful 3 actress Harleen Sethi turns into a temptress in these gorgeous clicks 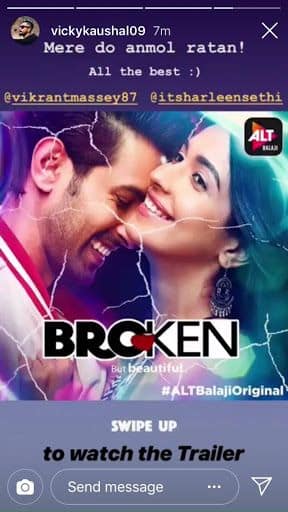 Now this has been an incredible year for Vicky Kaushal. He got a Rs 300 crore film (Sanju), a Rs 100 crore film (Raazi) and a movie where his rockstar attitude was hugely appreciated. Uri is his next release which will hit the theatres soon.