Anushka Sharma turned 31 today. She actress is spending some quality time with her husband and cricketer Virat Kohli down by the lakeside with the sun setting far away. Virushka never fails to give us some major couple goals.

Virushka, we tell you are giving out some major couple goals. Like literally our hearts are in our mouth right now. Courtesy, Virat Kohli’s Instagram post. Oh my God! These two are soooo charming that we, for one, cannot stop gushing over these two. Ever since Anushka Sharma married Virat Kohli, the two lovebirds are defining love in their cute adorable way. Their PDA moments are just too cute to handle. Also Read - Yuzvendra Chahal's wife Dhanashree posts THIS comment on Anushka Sharma-Virat Kohli in an Ask Me session

Earlier today, we told you about Virat Kohli plan to celebrate Anushka’s birthday with an intimate, exclusive and private dinner. Well, thanks to Virat we can have a sneak-peek into their spree. Sources close to the two had revealed that Virat just wanted to spend a quite-intimate evening with Anushka on her birthday. And guess what? The Indian skipper has lived to his plan. Virat shared a cute video of himself and Anushka sitting by the lakeside and chatting happily as the sun sets beyond the mountains. The scenic view and on top of that their unspoken chemistry is melting our hearts. With just a heart and video credits to Supreeth, from the Royal Challengers Bangalore team, Virat shared the video on his Instagram handle. Have a look… Also Read - Trending entertainment photo gallery: Rubina Dilaik, Sriti Jha, Anushka Sharma, Alia Bhatt, Shanaya Kapoor and more unmissable celeb pictures of the day

He also shared a picture of Anushka leaning on his shoulder and they both enjoying the sunset as they spend some quality time together. Have a dekkho… Also Read - Unseen pics of Shraddha Kapoor, Alia Bhatt and more Bollywood actresses who are papa ki paris 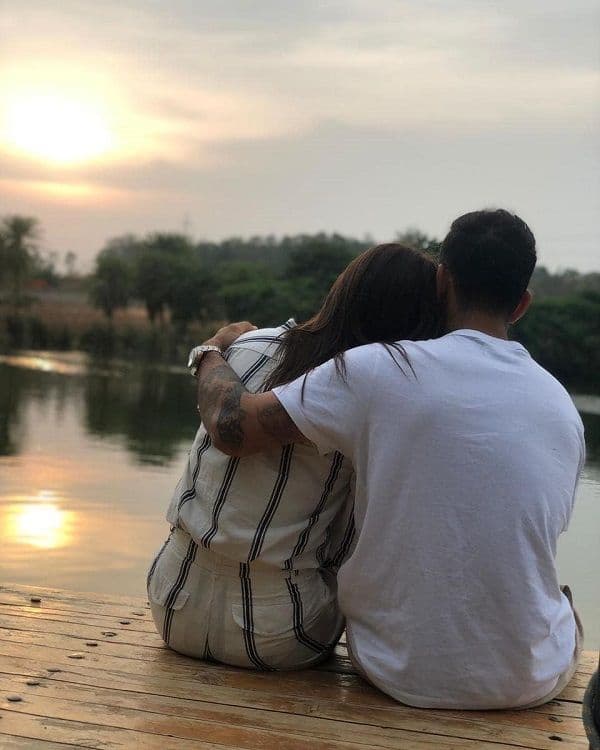 Virat Kohli and Anushka Sharma enjoy a quite get away

Isn’t it cute? Aren’t they super adorable? We think so too.

Meanwhile, enjoy some more of the PDA moments of Virushka here…

Love is beyond and above everything. The only thing that's real . It's all encompassing and beyond the reach of the mind . Happy Valentine's day to all ❤️

You make me such a happy girl ?

On the work front, some reports suggest that the actress is planning to venture in direction. It is being said that the actress could direct a movie for her own production house. On the film front, Anushka has not yet announced any further projects. Virat, on the other hand, is busy with IPL, later he has the world cup lined up. Yet with all those professional commitments, the cricketer has won hearts by taking out time for his wifey. Way to go Virushka!