Was Lady Gaga's appearance at the Grammy Awards influenced by Jennifer Lawrence's Mystique avatar in X-Men?

Lady Gaga's Grammy avatar reminded us a lot of Jennifer's Lawrence's Mystique from X Men but do you feel the same? 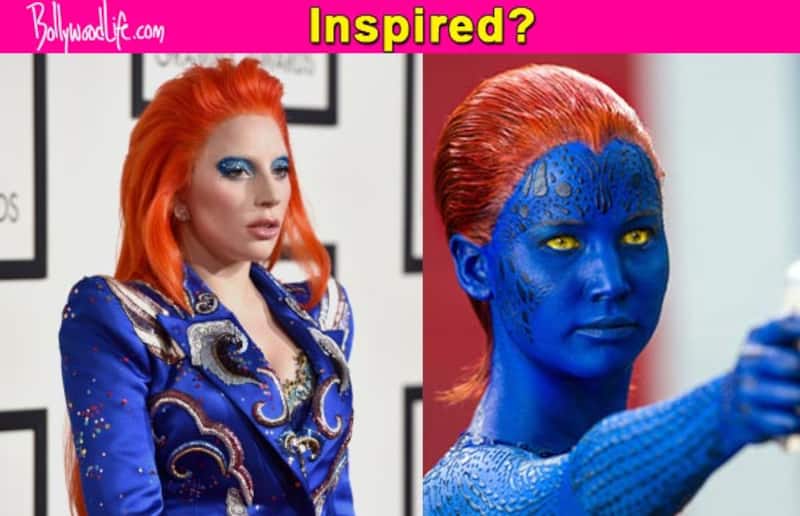 Anndddd Gaga's back in the eccentric fashion game! Read on...

Lady Gaga's fashion sense is one thing that while a lot think is creative, several beg to differ. I personally find it atrociously wow! Now that was an oxymoron and I'll explain why I said that. She dresses up in such a way because she wants to be recognised and unlike others who resort to looking normal, Gaga chooses to look out of place! So while it doesn't please the eyes, the reason and the fact that she gives zero f**ks makes for the good part. So last night when she made a red carpet appearance at Grammy Awards, she looked nothing less than eccentric. Well, we all knew that she had a tribute performance slated for legendary artist David Bowie and for the same, she dyed her hair orange and also dressed up in this blue Marc and Jacobs gown. Also Read - Trending Hollywood News Today: BTS X Bad Decisions MV disappoints ARMY, Lady Gaga joins Joaquin Phoenix' Joker 2 and more Now at first when I saw this appearance of hers, three thoughts instantly crossed my head. One, she's back in the odd but awesome fashion game, two, she reminded me of mad hatter (Johnny Depp) from Alice in Wonderland and three, Mystique! (Jennifer Lawrence). Obviously she has dress in such a kooky way to show her fans that she's still the crazy fashionista but at the same time to tribute David Bowie. But I think this ensemble and her avatar resemble Mystique of X-Men a lot! Also Read - Hugh Jackman's wife Deborra-Lee Furness reacts to rumours about the X-Men star's sexuality; says, ‘If he was gay…’

So when I saw this picture, I really couldn't help but just put out this post and ask you BollywoodLifers if you thought the same! Don't hold up, just press the vote button and cast yours to tell us if it's a yes or no. Oh and BTW, her tribute performance cannot be missed by all Gaga and Bowie fans so do watch the video as well!