Manish Malhotra has shared a video of Alia Bhatt donning Kareena Kapoor Khan's Jab We Met avatar and we know exactly why. 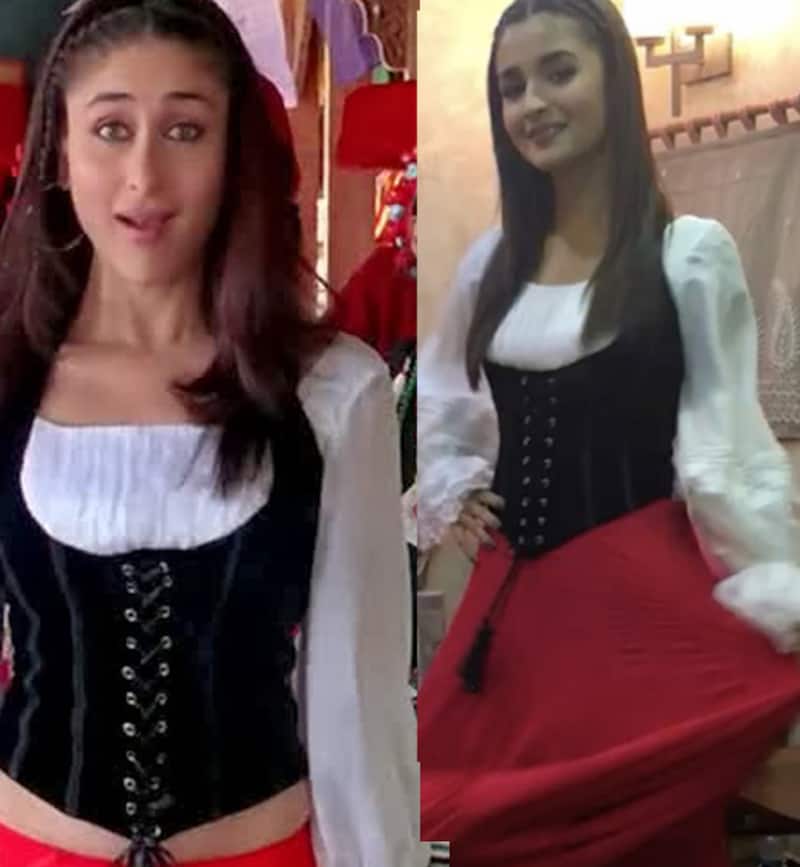 Alia Bhatt's role model is Kareena Kapoor Khan and that's a fact every body is well aware of. However, why on earth is she wearing the same costume from Bebo's Jab We Met song Yeh Ishq Haaye? Well, don't worry y'all, we got an answer for the same. The diva has paid a tribute to her role model, Kareena, for which she donned the outfit. A cute Boomerang video of the 23 year old striking a pose wearing Bebo's famous outfit from Jab We Met was shared by fashion designer Manish Malhotra. At Filmfare awards held on Saturday, Alia had performed in Bebo's songs and this is just one of the looks form her long stretched dance performance. To be quite honest, we think the actress looks adorable as she shows off her look. Also Read - Laal Singh Chaddha actor Aamir Khan visits Golden Temple a day before release; B-town actors who went to religious places to pray for their film's success

Just like Bebo, her ardent follower has also rose to fame for her spectacular performances in films. 2016 has literally been one of the best for Alia as not only did she have three releases but they all did brilliantly at the box office and amid critics. In fact, the 23 year old has become so bankable that every director has her name on their list of actresses to work with. While she is being extra choosy and careful with the films she takes up as her next project, she is also sweeping away a lot of accolades at award functions. So far at every awards function, Bhatt has taken home the trophy for her performance in Udta Punjab and Dear Zindagi. Basically, her career graph is going superbly and perhaps it's all credited to her role model, Kareena, who herself has had a successful stint in the industry for 16 years. Anyway, check out her video below. (ALSO READ - 'Now a beautiful mommy to the most stunning day old baby,' Alia congratulates Kareena with this cutest message) Also Read - Laal Singh Chaddha: Aamir Khan has been spending sleepless nights; shares what he feels about the Boycott trend

There have been various speculations on the next film Alia will be signing. So far she has signed Ayan Mukerji's Dragon and wrapped up Badrinath Ki Dulhania. A lot of movies have been offered to the actress but she's being very careful with what film she does next. We remember how Kareena refused some of the best movies in the past. Hopefully Alia wouldn't do the same mistake. Anyway, we just can't wait to watch what the petite actress has in store for us in Filmfare Awards. Just in case you didn't know, the actress did take home the black lady for her phenomenal performance in Udta Punjab! Stay tuned to this space and we'll share with you what the actress has planned as a tribute to her role model! Also Read - Salman Khan, Kareena Kapoor Khan, Malaika Arora and more: Bollywood celebs who got trolled for their age; called 'buddha', 'buddhi ghodi laal lagaam'