Did Varun Dhawan get to meet Sachin Tendulkar, we wonder!

Varun Dhawan has gone on record to say that he is a huge Dwayne Rock Johnson admirer. In fact, his fans got the international star to tweet birthday wishes to the Badrinath Ki Dulhania actor on Twitter once. That's one thing nobody can claim has happened to them. Since then, the duo have often found chatting on Twitter. And now we think we have unearthed yet another idol of Varun or how will you explain him standing outside Sachin Tendulkar's vanity van? (Also read: Here's why Varun Dhawan said sorry on Twitter - view pics!) Also Read - Yoga Day 2021: Alia Bhatt joins the BTS Butter fan club as she posts a fun video of her cat Edward checking out her awe-inspiring postures

Yes, we have pictures of Varun standing outside the door of the vehicle, pointing at the name and grinning. Sachin was spotted at Mehboob Studios and guess that's why his vehicle was parked there. As for Varun, the actor and his co-star from Badrinath Ki Dulhania were there to promote their film. Both the actors were in blue outfits and looked like treat to sore eyes. Their chemistry is so obvious that we hope they do more and more films together. Anyway, coming back to Sachin and Varun, we wonder if the latter got a chance to meet the Master Blaster. Now that's one thing only Varun can possibly say. Meanwhile, you can check out these pictures of Varun posing outside Sachin's van right here. Also Read - Prabhas-Prashanth Neel, Allu Arjun-Sukumar: 5 biggest director-actor collaborations that promise to shatter records left, right and centre 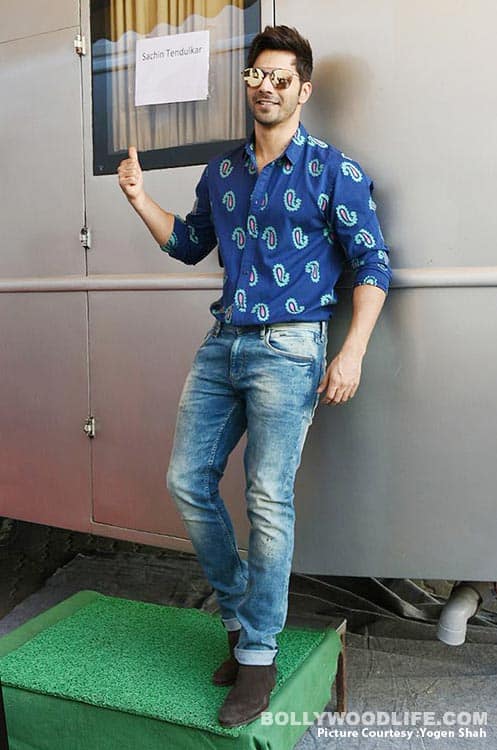 Workwise, Varun Dhawan is doing great films. 2017 for him will begin with Badrinath Ki Dulhania which has a lot of buzz surrounding it. Then there is Judwaa 2, where the lad reprises both of Salman Khan's characters, Prem and Raja. Recently, they started shooting the film with a song. We feel Varun is the right choice for the sequel as he has that charm to entice you with his gentleman self and also with his tapori style. Salman has even sent him denims that he can wear for Raja's character. He definitely has the blessings of the the original cast and that means, this will be a stellar film.