What? Jacqueline Fernandez proposes a guy on national television!

Jacqueline Fernandez surprised everyone by expressing her love for this guy!

No! Jacqueline is taken?

Jacqueline Fernandez, who can be currently seen on Jhalak Dikhhla Jaa 9, has broken all her fans’ hearts with this news! Yes! The Sri Lankan Beauty recently proposed a guy on national television. Wanna know who is that lucky one? Well it’s none other than our favourite comedian Kapil Sharma. Also Read - Bollywood's top actresses who almost went nude for the sexiest photoshoot ever – view pics

Before you jump on to conclusions, let me tell you that it was a part of The Kapil Sharma Show. We all know that Kapil never misses out on a chance to flirt with his female guests, be it Deepika Padukone, Parineeti Chopra or Alia Bhatt. And, Jacqueline is his recent love-interest, it seems. He was seen wooing Jacky during the promotions of Dishoom last week and he continued flirting with her during the promotions of A Flying Jatt too. But, Jacqueline had some other plans this time! Also Read - Trending OTT News Today: Aakashavaani trailer is mysterious, Ek Thi Begum 2 trailer is gripping, Bhoot Police continue to rule and more

He said that the flirting phase is always fun and exciting but the real responsibility comes when the girl accepts your proposal. This is when Jacqueline decided to outwit him by accepting his proposal. Now this was a befitting reply to him, no? Also Read - WHAT! These TOP actresses are lowest paid in Bollywood and their paychecks will leave you shocked

In the upcoming episode of the show, Kapil will be seen taking Jacqueline out on a date. It will be a quintessential Bollywood date where the guy gives a red rose to his girlfriend. Jacqueline will play along and accept all his praises and gifts. They will also throw a wedding reception party on the sets, soon after the date. 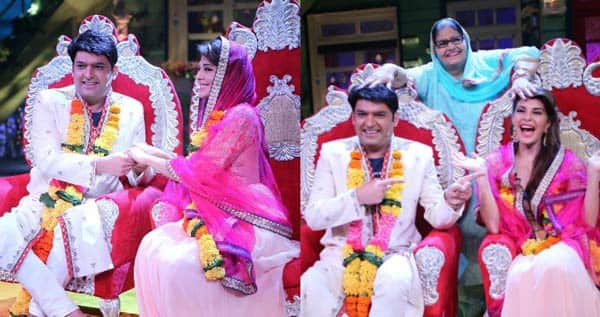 The fun-filled episode was shot recently. Interestingly, Kapil’s mom was also on the set when all this was happening. She too played along and got on to the stage to bless the newlyweds at the reception. Dr. Mashoor Gulati, Nani, Chandan and other family members of Kapil also joined them in the celebrations.

Indeed, we have a lot to look forward to in the upcoming episode of The Kapil Sharma Show.