Kareena Kapoor Khan and Malaika Arora Khan spotted outside their gym in the same pair of yoga pants!

As if it wasn't enough that Kareena Kapoor Khan was making us get out of our beds and head to the gym, the actress is now giving us friendship goals with Malaika Arora Khan. We already know that Bebo, Malaika and Amrita Arora are pretty close and they even work out together. We've seen Bebo and Amrita sweat it out together at the gym. But Bebo was recently spotted in her printed black and white yoga pants with a full sleeved black top outside the gym, which was damn good. But that's not it, Malaika was also seen wearing the same yoga pants. Also Read - From Shilpa Shetty Kundra to Malaika Arora Khan: 5 Bollywood actresses who donned animal print with panache

Though they might not be wearing it at the same time, we must say they looked super fit and stylish in it. While Kareena chose to pair her look with a couple of sports shoes, Malaika went with slippers. Bebo let her hair down and Malaika tied it up in a bun. It is so cool that these two besties were twinning with the same pair of yoga pants outside the gym. There was a time when two actresses wearing the same outfit was frowned upon but now twinning is such a rage that even actors can't escape it. (ALSO READ: Meet Kareena Kapoor Khan’s new gym buddy, Saif Ali Khan – view HQ pics) Also Read - Disha Patani, Malaika Arora, Kriti Sanon - which beauty's swimsuit look was the hottest? Vote Now

Check out this picture of Kareena and Malaika slaying it in a monochrome gym look. Also Read - Arbaaz Khan reacts to being called ‘Khula Saand’ after his divorce with Malaika Arora 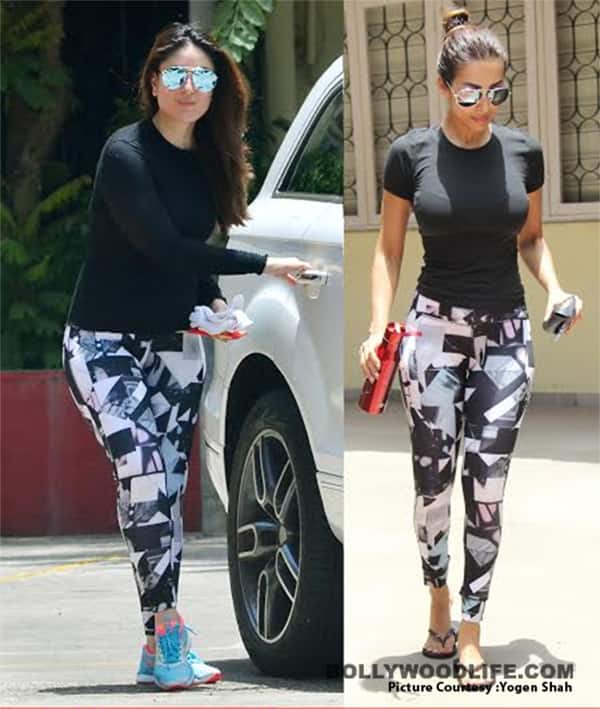 And they look quite hot! Kareena has been a regular at the gym and small videos of her workout sessions are going viral on the Internet. The actress wants to get back in shape quite quickly and has already managed to lose a lot of weight. Forget breaking myths and stereotypes during pregnancy, the actress is continuing to do the same post-pregnancy, too. Saif Ali Khan has, too, joined his wife at the gym now and the two have been working out together. Now that's how contagious and effective Kareena's workout sessions are!

Coming back to these yummy mummies and their fashion outing outside the gym, what are your thoughts on it? Tell us in the comments below and stay hooked with us for more.