Let's look at a few popular Bollywood actors who have locked lips for the first time in the career.

Before the V-Day, that's tomorrow, we have the Kiss Day. In the build up for Valentine's Day, we have some very interesting days to celebrate like Rose Day, Chocolate Day, Hug Day and now Kiss Day, making us wonder what exactly does people want us to do on Valentine's Day. Now guys, don't go on asking for 'Kiss De' just because it's 'Kiss Day', or be ready to face a slipper, a lawsuit or a police case just Also Read - Did Twinkle Khanna want to slap Priyanka Chopra because of Akshay Kumar? Read shocking deets

So on this special day, let's go filmy and look at a few Bollywood actors who have locked lips for the first time in the career. While Salman Khan chose to remain a 'virgin' when it comes to onscreen kissing, we cannot say the same about his other peers, couple of them even breaking their no-kissing policy after being in the business for more than two decades. Let's look at these actor's first time kisses. Also Read - Bellbottom: Akshay Kumar puts an end to speculations; CONFIRMS the release date of the film

Ajay Devgn in Shivaay Also Read - How well do you know Akshay Kumar? Take this quiz to find out

Ajay Devgn has done some hot scenes with Aishwarya Rai Bachchan (Khakee), Kareena Kapoor (Omkara and Satyagraha), Kajol (U Me Aur Hum), but this is the first time he is locking lips with an actress in a nearly three decade career. To make it special, he and actress Erika Kaar engage in a passionate lovemaking scene inside a hanging tent! That's a first, anywhere!

I believe there is a deleted scene in Maya Memsaab that has Shah Rukh Khan share a kiss with Deepa Sahi floating somewhere around, though the edited scene in the final film itself is scorching hot enough. However, his first official kissing scene happens to be for late Yash Chopra’s swansong, Jab Tak Hai Jaan, with Katrina Kaif. Incidentally, he locks lips with the Baar Baar Dekho actress three times in the movie. 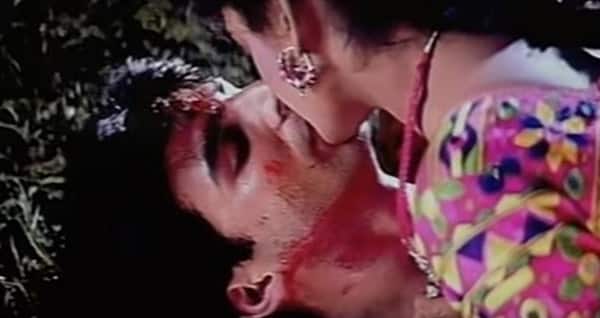 Akshay Kumar may not be seen kissing his heroines lately (in fact, he even had removed a kissing scene with Ileana D’Cruz in Rustom), however he had no such qualms in his early phase of career. His first film as a leading man had him share a peck on the lips with his leading lady, Shanti Priya. Sorry, we couldn't find the video though.

In his mega debut film, Hrithik Roshan has a sweet peck on the lips moment with Ameesha Patel when they were stranded on a lonely beach. His first most passionate kiss was with Aishwarya Rai Bachchan in Dhoom 2.

Aamir Khan is the only Khan among Shah Rukh and Salman to have no problems kissing onscreen, last seen kissing Katrina Kaif in Dhoom 3. His first kiss was in his debut film, which, interestingly, is not Qayamat Se Qayamat Tak, as many believe. His first film as an adult was Ketan Mehta’s campus movie, Holi, which also happens to harbour AK’s first kiss. Guess who was the lucky lady? Telly actress Kitu Gidwani!

Ranbir Kapoor may not have kissed Sonam Kapoor in his debut film, Saawariya. However he locked lips with not one but three hot ladies in his second film. He first kissed Minissha Lamba, before sharing a passionate kiss in the elevator scene with Bipasha Basu. Then there is the final kiss with his ex, Deepika Padukone. Some guys have all the luck!

Band Baaja Baaraat heralded the arrival of a new bindaas hero in Bollywood, who has no qualms in even endorsing a condom. That hero is Ranveer Singh. That kissing scene with Anushka Sharma in the film was talked about a lot, because of its length and for the fact that how tastefully it was shot.

When he was that angry, young man, he had never kissed his heroines on screen, however Amitabh Bachchan dropped his stance for Sanjay Leela Bhansali when he kissed for the first time in Black, that too in his ’60s. However, that scene with Rani Mukerji was not romantic at all; instead it sent us into recesses of depression, making us feel bad for both the characters. Big B did another small kissing scene with the late Jiah Khan in Ram Gopal Varma’s Nishabd, which became a lot more controversial.

Shahid Kapoor in Jab We Met

Before they broke up, Shahid Kapoor and Kareena Kapoor acted in quite a few films. However, it was in their first film after their breakup that they finally kissed onscreen. This also happened to be Shahid’s first onscreen kiss, a trend which he later followed up on in films like Badmaash Company, Kaminey, Haider and others.

Sidharth Malhotra in Student of the Year

Student of the Year had the debut of Sidharth Malhotra, Alia Bhatt and Varun Dhawan. Though Alia Bhatt was paired with both the actors at different junctures of the movie, it was only with Sidharth Malhotra that the kiss happened, which turned out to also be the first kissing scene Karan Johar had directed.

Though it was Sidharth who got the chance to lock lips in their debut film, Varun Dhawan took the missed opportunity to do pucker up his lips in his second film, where he kissed his heroine Ileana, quite a few times in the climax.

Arjun Kapoor made a strong debut in this rustic version of Romeo and Juliet. One of the film’s most impactful scenes was the consummation scene between Arjun and Parineeti Chopra’s characters, which leads to him revealing his true colours.

There have been reports where Nawazuddin Siddiqui has claimed he has never kissed a heroine onscreen. Perhaps he has forgotten this award-winning noir film, Miss Lovely, where he shared a passionate French kiss with Niharika Singh.