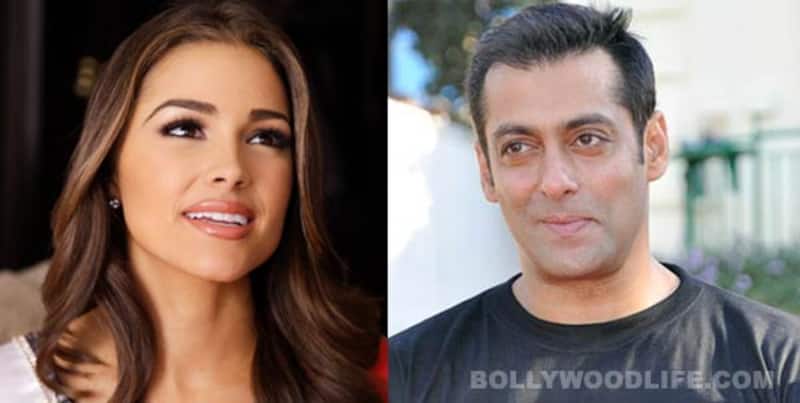 We hear that the Salman-Iulia Vantur love story has ended; will Sallu fan Olivia be the superstar's new lady?

Katrina Kaif, Iulia Vantur and now… Olivia Culpo? What is Salman Khan up to? Ever since the new Miss Universe, Olivia Culpo has revealed that she’s a big Salman fan, there have been all sorts of reports trying to link the 21-year-old beauty with Sallu! Also Read - Katrina Kaif, Priyanka Chopra, Ranveer Singh and more Bollywood actors who got accused of throwing tantrums while on flight

The American beauty queen who is in Mumbai as part of her crown commitments to raise awareness about Aids and female infanticide took some time off to visit Salman Khan at his Panvel’s farm house. Reportedly, fashion designer Sanjana Jon has coordinated Olivia’s trip to Mumbai and she was keen to share the platform with the Dabangg actor to contribute for social causes. Also Read - Bigg Boss 16: Faisal Shaikh and Kanika Mann the first two confirmed contestants for Salman Khan's show?

We heard Sallu and Culpo bonded big time over charitable talks to the extent that gossipmongers even suggest that she is Khan’s next blue-eyed girl! While talking to the press, Culpo said, “I love Bollywood movies and Salman Khan is my favourite.” She has reportedly even stated that she would love to act in a film with the box office king. Also Read - Salman Khan vs Shah Rukh Khan: 'Throw SRK to Pakistan' trend takes over Twitter after Salmanics demand 'We don't want SRK in Tiger 3'

We all know that the big-hearted actor goes out of his way to help his friends and loved ones. So the ultimate question is – will the Kick star go a step further as far as his connection with Olivia is concerned. What do you think peeps?