Will Salman choose Shahrukh over Aamir? 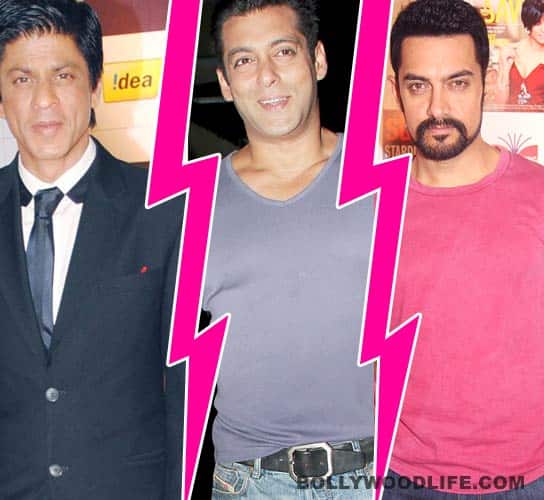 Just when you thought that the Shahrukh Khan-Salman Khan rift had become old news, tinseltown is buzzing again about it. This time, the cold war has shifted to the small screen. You know Shahrukh is producing a show on UTV Stars, right? A show called Live My Life, wherein you get to see what happens to a celebrity through the course of a day. Of course, it’s a one-hour show so all the boring bits will be edited out. And the format is not new for the Khan himself, who had been a part of a similar show on TLC. Anyway, when you are a new channel with a new show, you approach the big names. That’s what the channel did this time too – they spoke to all the big stars for the show. Even SRK’s two biggest rivals – Aamir Khan and Salman Khan. Aamir, we hear, has refused to be a part of the show. But the best part is, Salman just might say yes! Sources tell us that unlike his good friend, Sallu has not yet refused the offer. Though he is busy promoting Bodyguard and shooting two other films, he is expected to make time for SRK’s show. Especially as he has agreed to appear on Preity Zinta’s chat show Up Close And Personal on the same channel. Does this mean Salman, who is yet to forgive Vivek Oberoi, is willing to let bygones be bygones with Shahrukh? And will this affect his friendship with Aamir? Or is it simply a matter of money and we are reading too much into it? We’ll wait, observe and keep you updated. Watch this space! Also Read - Kareena Kapoor Khan gives a glimpse of her 'special' birthday celebrations and the promise she has made to herself