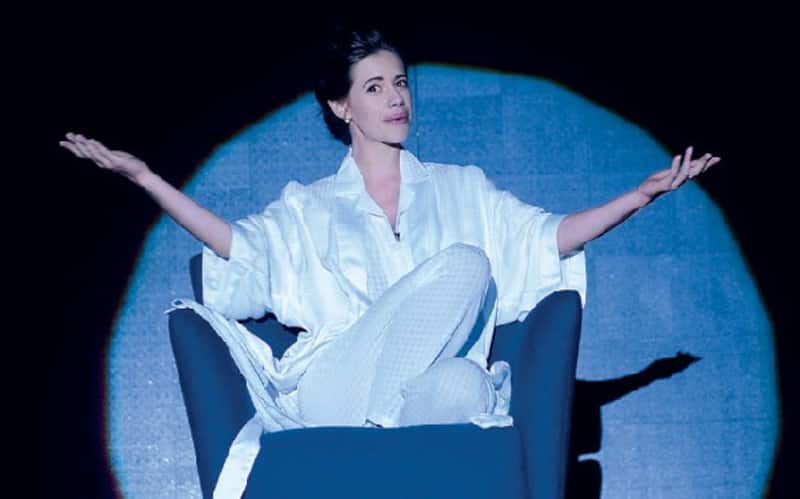 Having acted in plays like "Colour Blind" and "Skeleton Woman", Kalki’s connection with stage is older than movies...

The play, which deals with the perennial debate of life versus death, was staged at the India Habitat Centre here as part of the ongoing Old World Theater festival. Though the actor was a bit nervous about the feedback of the cognoscente, she was equally excited about bringing her production to the capital. “I was very excited to come to Delhi as I have lot of theater friends here, whose opinions matter to me. I was a little nervous about their reaction,” Kalki said. Also Read - Malaika Arora-Arbaaz Khan, Hrithik Roshan-Sussanne Khan and more Bollywood couples who remained good friends even after divorce

Death is real in The Living Room as played by Neil Bhoopalam. He waits in the living room of Ana Nil (Sheeba Chadha), to wake her up from sleep. Dressed in a black coat and his body painted in blue (wearing a red shoe), death sometimes act like a fool exhibiting all human fallacies. He loves to savor ginger cookies, tea and engages in a conversation with Ana who doesn’t want to die. Also Read - Trending Entertainment News Today: Salman Khan walks out of No Entry Mein Entry; Jacqueline Fernandez's lawyer claims innocent and more

Kalki says that the idea came about in a sleepless night and Woody Allen’s sense of humor was a driving force. “I couldn’t sleep one night and wrote a two-page scene between death and an old woman where she argues with him about life and death. Woody Allen's sense of humor has always attracted me and I love the way he can make life so meaningful and yet show us what a farce it can be at the same time,” said the actor, who majored in theater from the University of London before her Bollywood entry. Also Read - Kalki Koechlin opens up on being typecast because of her skin colour; reveals being offered certain kind of roles/characters

With death on her bedside, Ana travels back and forth in time revisiting her childhood to the present. Though the play glimpses some surreal moments with well-crafted montages juxtaposing life and death, it consciously desists from tackling death in a philosophical tone. “It is a farcical comedy. I always want to entertain people, not lecture them, although this is far from a commercial subject, the way the story is told to make people enjoy and experience, rather than objectively sit outside it and analyse,” Kalki said adding that her play is a comment on the society.

“I wanted to convey how sometimes it takes death for us to wake up and appreciate the experience of life. Death inadvertently helps Ana live her life one last time. Also it's a comment on our modern lives, and how cheap and aggressive life has become, overpopulation, war, disease has all contributed to living becoming more about survival than experiencing life,” said Kalki who has received critical acclaim for her roles in movies like Dev D, Margarita, with a Straw among others.

The plot of the play thickens as Jo (Tariq Vasudeva), Ana’s estranged lover, and Ana’s rich godson, Born Kuber (Jim Sarbh), rushes in for shelter from a wild storm. It takes an intriguing turn when Dr. Zeus is summoned to investigate the stranger in the house.

Asked how she managed a highly talented crew, Kalki replied: “I love my cast, a bunch of talented and stubborn actors! Each one of them has a different belief on death, so that added to the play, rather than having one point of view, the play offers several. It was difficult for me to know when to let them explore and when to rein things in and edit things out,” she said. Feminism is a way of being for her, affirms the actor as like the character Ana, who is strong, stubborn, and an independent woman.

Having acted in plays like Colour Blind and Skeleton Woman, Kalki’s connection with stage is older than movies. The actor feels that while she becomes an introvert in movies going deeper into the characters, theatre keeps her alert. “I love both mediums. Theatre is something that keeps me very alert and I am actively creating whether I am on stage or directing. In films, I feel I become more of an introvert, going deeper in the realism of a character,” she said.

Kalki also vouched that she will be back in stage soon. "I'm dying to go back on stage (pun intended).” Asked about her next movies, she said: "I have finished Waiting by Anu Menon. Another movie Jia aur Jia is finally ready but I have not started any new film yet."