What do you think of Jhanvi Kapoor's latest airport look?

Jhanvi Kapoor never fails to impress us with her fashion outings but her recent fashion outing is far from impressive. Well, let's just say we hoped for better. The soon-to-be actress was seen wearing a sleeveless crop top with denim and loafer heels. Well, it wasn't as flattering as we were hoping to see. Jhanvi usually always stuns us with her fashion outing but she disappointed us with her airport look this time. Not that the outfit is bad but there is something very off about it. The star kid has set such high standards for herself that we are always ready to be impressed when she steps out of her house. Also Read - Arjun Kapoor REVEALS what kind of equation he shared with Janhvi Kapoor before and after Sridevi's death

She even nails all her workout looks. But you guys have a look and tell us what you really feel about her outfit. Jhanvi is media's and paparazzi's favourite kid, especially after it was announced that she will be making her debut in Bollywood. According to sources, she will be starring in Sairat's Bollywood remake opposite Shahid Kapoor's brother, Ishan Khattar. Rumour has it that Jhanvi has already been offered her second film, too. The star kid was originally considered for Student Of The Year 2 but the project got shelved due to certain reasons. (ALSO READ: Sridevi passes on her success mantra to daughter Jhanvi Kapoor right before her BIG Bollywood debut) Also Read - 6 secretive weddings of Bollywood stars that left everyone shell shocked – view pics 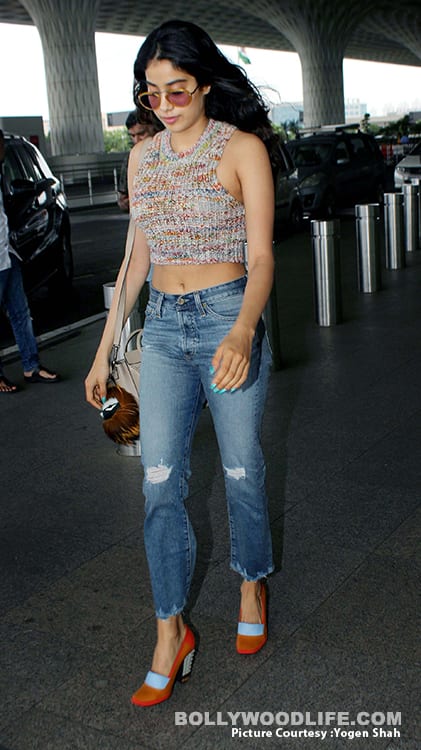 So what do you think about her airport look? We think it could have been better. In fact, if she had added a jacket to the look, it would have looked much better. Jhanvi has been in the news for a lot of things apart from her fashion outings and Bollywood debut. Sridevi's upcoming film, MOM, has ensured that her daughters are also in the news. In a recent interview, Sridevi spoke about how she has set strict rules for her daughters and about Jhanvi's Bollywood debut.

The superstar mum caused an uproar on social media after she confessed that she would be happier to see her daughters getting married than venture into Bollywood. Yes, she clarified her statements later by saying that she just wishes for a relaxed life for her daughters than the hectic one they've chosen and that she'll stand by them whatever they choose to be.

Coming back to Jhanvi's airport look, what are your thoughts on it? Tell us in the comments below and stay hooked with us for more.